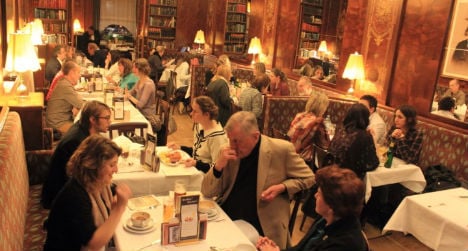 The unusual event held at Cafe Ministerium was a collaboration between a qualitative research conference and Vienna’s regular Coffeehouse Conversations meet-up hosted by culture organisation spaceandplace.

Participants were presented with a menu of questions that range from ‘How important is money and power to you?’ to ‘Which part of your life was a waste of time?’, taken from the book ‘An intimate history of the world’ by Oxford historian Theodore Zeldin.

The one-on-one conversations are designed so the participants can quickly get to know each other’s deepest thoughts.

“Going deep quickly in conversations is a thrill,” says Kendall Nash, co-chair of the Worldwide Conference on Qualitative Research that helped to organise the event. “I think people at the conference who have come here tonight will find that valuable – for their own research too.”

Nash’s colleague and co-chair Susan Abbott agrees, explaining that the event is part of the conference’s aim to encourage cross-cultural interaction.

“Here we get to meet a variety of people and ask them deep questions. But instead of talking about brands we get to talk about ideas,” she says.

At last night's event half the participants were qualitative researchers who already have an academic interest in meeting people and carrying out interviews. Normally, however, the Coffeehouse Conversations take place between any visitors – or outsiders – to the city and locals.

First hosted in 2013, the event is also trying to revive some of the deep and philosophical conversations that would have typically taken place in such venues over a century ago.

“The coffeehouses were places where people like Freud would have worked – he had a table across town in Café Landtmann,” explains spaceandplace’s Eugene Quinn. “But these days some people in the city aren’t so fond of the coffeehouses. This is a nice way to make them become celebrated again.”