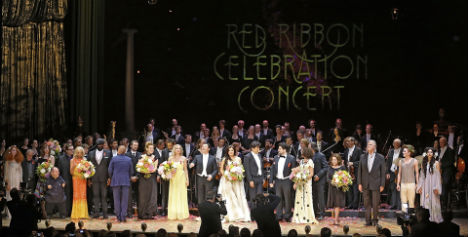 The concert held in support of HIV/AIDS projects has been put on every year since it was first organised by 2012 and is supported by some of the biggest names in the classical music scene.

The event normally coincides with Vienna’s famous Life Ball event, which organisers have chosen not to hold this year.

Vienna's Life Ball is a charity event that was founded in 1992, and is organised by the non-profit Aids Life foundation to raise awareness and money for HIV causes. However, organisers have opted to take a year out as they say they want to take a creative break and rethink how the event can best be used.

For Life Ball fans still wishing to attend an event to show their support for the cause can instead buy tickets for the elegant Red Ribbon Concert being held at the Burgtheater, with prices ranging from €100 to €290.

This year the event will focus on the mythical story of Orpheus and his trip to the underworld, from where he tries to bring back his beloved Eurydice to the world of the living with his singing.

There will be extracts from the operas of Claudio Monteverdi and Christoph Willibald Gluck, plus pieces of music by W.A. Mozart and Franz Liszt as well as contemporary soul music and literary versions of the story from Ovid to Ingeborg Bachmann.