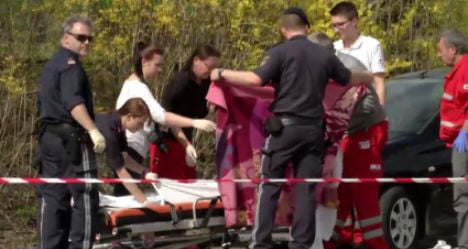 The 33-year-old man attacked his 30-year-old wife and her 29-year-old sister with a folding knife as they stood near a shopping centre in Kapfenberg around 2pm yesterday.

The sisters both suffered multiple stab wounds and died from their injuries at the scene. The 30-year-old leaves behind three children and her sister leaves behind two, all of primary school age.

A bystander who rushed to rescue the women when he spotted them being attacked was also injured in the incident and taken to hospital.

The man fled the scene but was arrested by police at a nearby service station where he had thrown away the weapon. Police say he reportedly carried out the frenzied attack following a relationship breakdown with his wife, who was living separately from him.

Whether he was under the influence of drugs or suffering a psychotic attack have not been ruled out.

Eyewitness Eva Pichler told Kleine Zeitung newspaper: “There was a man in a red t-shirt, who completely flipped out and then ran off with bloody hands.”

One acquaintance of the attacker told ÖSTERREICH newspaper that the unemployed man, who had suddenly become a devout Muslim two years ago, had announced the morning of the attack that “you will all hear from me again today”.

The provincial criminal office have taken over the investigation from the police.