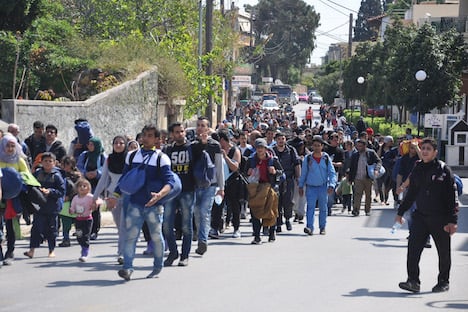 Some 750 migrants are set to be sent back between Monday and Wednesday, Greek state news agency ANA said, the first wave of deportations under the much-criticised agreement struck last month.

All irregular migrants now face being sent back from the Greek islands to Turkey, as Europe grapples with its worst migration crisis since World War II.

Greece has been struggling to get the infrastructure in place under its side of the deal, which has been met with scepticism by EU members like Austria, while the United Nations argues it is illegal.

ANA said the migrants would be sent back from the island of Lesbos to the Turkish port of Dikili, adding that EU border agency Frontex had chartered two Turkish leisure vessels for the operation.

There will be one Frontex agent onboard for every single migrant, ANA said. Kyritsis declined to comment on the report.

On the other side of the Aegean Sea, work is under way on a centre to host those sent back in the Turkish tourist resort of Cesme, town mayor Muhittin Dalgic said.

Another is being created in Dikili, opposite Lesbos, one of several Greek islands that has seen a massive influx of people fleeing conflict and poverty in the Middle East and elsewhere.

The deal is the latest attempt to stem the number of people in search of a new life in Europe. More than a million migrants entered last year, and over 150,000 people have crossed the Aegean Sea to Greece in 2016.

For every Syrian refugee sent back under the deal, another Syrian refugee will be resettled from Turkey to the EU, with the numbers capped at 72,000.

“If they make me go back to Turkey I'll throw myself and my family into the sea,” said Mustafa, a Syrian waiting with his wife and children at the port of Chios island. “We went from hell to hell.”

“There are many things happening in Turkey right now that I don't like,” he told Austrian public radio O1.

“Collective deportations without having regard to the individual rights of those who claim to be refugees are illegal,” he told BBC radio. “Their rights have to be absolutely protected where they are deported to — in other words Turkey.”

Amnesty International said this week that Turkey was not a “safe country” for refugees, reporting that Ankara was forcing around 100 Syrians to return to their war-torn country every day.

Turkey rejected the criticism, with the foreign ministry saying Saturday “the allegations do not reflect reality in any way”.

As part of the same EU-Ankara deal, Turkey — which is hosting some 2.7 million refugees from neighbouring Syria — will on Monday begin sending a first batch of refugees directly to Germany.

Germany's interior ministry said most of the arrivals expected Monday would be families with children, putting the number in the “double-digit range”.

Hundreds of migrants continue to land in Greece every day despite the EU deal, and a Greek government source told AFP this week that some 400 Frontex police officers were expected to arrive over the weekend.

Fifty French riot police were arriving on Lesbos Saturday to help with the operation, with asylum experts to follow later in this week.

Clashes have also broken out at Greek facilities, and on Friday hundreds of migrants walked out of a registration centre on Chios following fresh violence, prompting a leading medical charity to pull out its staff.

Many of them headed to the port hoping to reach ships bound for the Greek mainland, but authorities rerouted the island ferry to another local harbour to prevent unauthorised boardings.

Over 52,000 refugees and migrants seeking to reach northern Europe are already stuck in Greece after Balkan states sealed their borders to stop the influx.