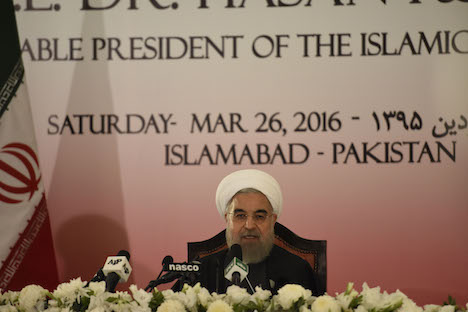 Iranian president Rouhani at a press conference in Pakistan over the weekend. Photo: EPA/T. MUGHAL

“The visit for March 30-31 by President Hassan Rouhani and his delegation has been postponed by the Iranian side for security reasons,” it said in a statement, without giving further details.

The Iranian government's official website confirmed the postponement, made “by mutual agreement”, but said nothing about security concerns. Neither Vienna nor Tehran gave a new date for a visit.

A spokesman for the Austrian interior ministry, Karl-Heinz Grundboeck, said there were “no concrete indications of any security threats” in Vienna.

Rouhani had been due to meet Austrian President Heinz Fischer on Wednesday in Vienna and Chancellor Werner Faymann the following day, as well as attend an Austro-Iranian economic forum.

He visited Rome and Paris in January.

The 2013 election of Rouhani, a relative moderate, led to something of a rapprochement with the West which in turn helped Iran and major powers reach the mammoth nuclear deal in Vienna last July.

Entering into force in January, Iran substantially scaled down its nuclear programme in order to put an atomic bomb out of reach. In return nuclear-related sanctions — but not others — were lifted.

Ructions with the West remain, however, including over Tehran's support for Syrian President Bashar al-Assad, the conflict in Yemen, Iran's ballistic missile programme and computer hacking.

With Rouhani having been elected on a promise to improve the economy, Tehran is also frustrated at what it sees as an incomplete lifting of sanctions, in particular on its banks.

Austria, like other European countries, and having hosted numerous rounds of talks that led to the nuclear deal, is keen to see its firms profit from the opening up of the Iranian economy.