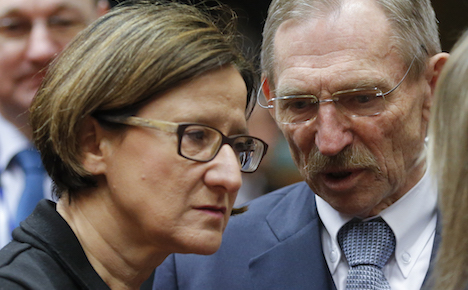 As of mid-May, the government will only accept cases of refugees facing threats to their safety in a neighbouring transit country or whose relatives are already in Austria.

“We will not consider any asylum requests unless we have to because of certain criteria… like under the (European) Convention on Human Rights,” Interior Minister Johanna Mikl-Leitner told a press conference in Vienna.

She said the decision was in accordance with European Union law which allowed member states to take national measures in emergency situations.

Austria — which last year received one of the highest asylum claims per capita in the EU — was no longer “obliged” to accept all requests because the migrant crisis posed “a threat to public order and national security”, Mikl-Leitner said.

The new rules will also force migrants to request asylum directly at the border in purpose-built registration centres, where they may be held for up to 120 hours while their application is being checked.

Illegal migrants caught inside the country will be taken to the border, Mikl-Leitner warned, while rejected asylum-seekers will be returned to the nation from where they crossed into Austria.

The government also reaffirmed its intention to step up controls at existing checkpoints along its southern frontiers, including at the Brenner Pass, a key European transit route on the Italian border.

Some 14,000 people have already applied for asylum in Austria so far this year, according to the interior ministry — reaching nearly half of the annual quota of 37,500 claims imposed by the government in January.

But the flow has slowed to a trickle since Austria and Balkan countries along the main migrant trail leading up from Greece shut their borders at the end of February.