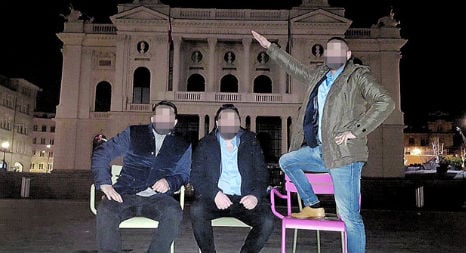 Abdurrahman A. was first in the news a few weeks ago after a photo emerged online of him making the fascist ‘Grey Wolf’ salute at Mauthausen concentration camp. The two fingered salute is used by members of a Turkish nationalist party to imply that Turkish Islamists will one day control the world.

Abdurrahman A. is a leading member of the Linz-based organisation Avarsya, who are closely related to the right-wing extremist group Grey Wolves from Turkey.

Avarsya have subsequently been excluded from taking part in the city’s Integration Forum after they failed to distance themselves from the act at the concentration camp.

Prosecutors are investigating the photo along with text that appeared underneath it on Facebook to see if any charges can be brought.

Now a photograph he posted online in January of someone making the ‘Heil Hitler’ salute has also been spotted, leading to the anti-hate crime organisation Heimat Ohne Hass reporting him to authorities.

The organisation accused Abdurrahman A. of circulating Nazi propaganda, which is illegal under Austria’s Nazi Prohibition Act.

According to Salzburg Green politician Simon Hofbauer, the man making the Heil Hitler salute in the photo published in January has been identified as a martial arts trainer who works with young people in Salzburg.

Hofbauer has accused the martial arts fighter – who reportedly lives nearby in Bayern, Germany – of spreading “Grey Wolf” ideology at a youth centre in Salzburg.

“He trained children and teenagers in March,” Hofabuer told APA. “This case demonstrates that radical and extreme right-wing ideology is being spread under the guise of sports and culture work.”