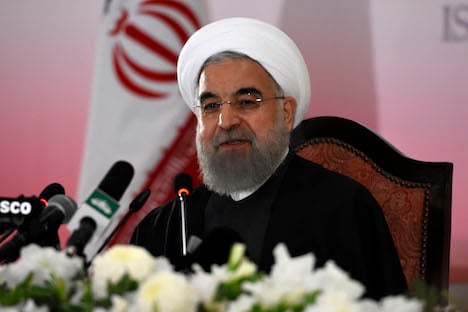 But more than two months later Iran is still struggling to make business with the West and banks are facing restrictions in the United States on handling transactions involving the Islamic republic.

“Austria alone cannot lift the sanctions. The EU cannot do it alone too, but it's the international community that should do it,” Fischer said, in comments published late Monday by IRIB.

“The US also plays a role in this regard,” said the Austrian president.

He was replying to a question about problems facing Iranian banks who wish to use the international payments system SWIFT allowing the resumption of foreign transfers.

Some banks in Iran have been able to reconnect to SWIFT since the lifting of sanctions was announced in January.

But banks accused of links to the country's elite Revolutionary Guards remain under US sanctions.

Last week a senior US State Department official said foreign banks looking to deal with Iran following the lifting of sanctions must avoid engaging with entities that remain subject to a US embargo.

Fischer, speaking ahead of a two-day state visit to Austria by Iranian President Hassan Rouhani that begins on Wednesday, said the process of lifting sanctions on Iran had “started”.

He added however: “I cannot make any predictions on how much longer it will take” before all sanctions are lifted.

“But I hope that all sides will remain committed to the nuclear deal so that all of Iran's sanctions are lifted in due and scheduled time,” Fischer added.

Last week Iran's supreme leader Ayatollah Ali Khamenei accused the United States of failing to respect the nuclear deal and that Washington's allies are afraid of dealing with Iran.

Washington has lifted sanctions “on paper”, Khamenei said on March 20, “but they are using roundabout paths to prevent the Islamic republic from achieving its targets”.

In Western countries which are under the “influence” of Washington, “banking transactions come up against problems,” he added.

A protest is planned by opponents of the regime and Iranian exiles in Vienna, who plan to gather at Stephansplatz at noon on Wednesday.

Spokesman Shahin Gobadi of the Foreign Affairs Committee of the National Council of Resistance of Iran (NCRI) said:  “Welcoming Rouhani and other leaders of this regime will encourage them in the violation of human rights in Iran, as well as in the export of terrorism, fundamentalism and warmongering in the region and the world.”
“Any relations with this regime should be preconditioned to the annulment of the death penalty in Iran and this regime’s interference in the region.”
“Rouhani has always been among the highest ranking officials of this regime and should face justice along with other leaders of this regime for crimes against humanity. He is no different from other regime leaders as far as suppression and export of terrorism is concerned.”