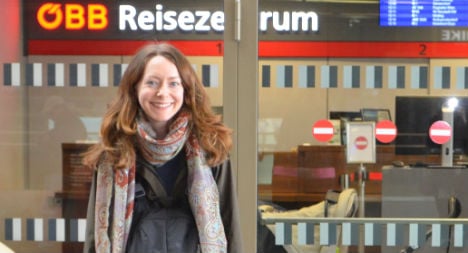 Working out what’s best for the British people is a complicated task, not helped by the lack of impartial information available about the pros and cons of EU membership.

One frustrated British woman decided to avoid the rhetoric altogether and go straight to the source. Between March and the referendum day in June, Rebecca Sumner Smith, 35, is attempting to travel to every one of the other 27 EU states to find out what life is like for British migrants on the continent.

Along the way she will be blogging on the website We The EU about the people she meets and trying to get to the bottom of what it means to be British in Europe. The Local Austria caught up with Rebecca – who until recently has been living in Berlin – in Vienna and asked her why she started the project.

“I was a British citizen working in Germany and it had been very easy to move there so if you had asked me ‘are you pro-EU’ I would have said ‘yes’,” she says. “But I was really aware if someone put a gun to my head and asked ‘why?’, I couldn’t answer. I thought this is a huge decision. I need to definitely learn more. I’ve probably just taken that to the extreme a bit.”

With Greece and the Czech Republic already done, Rebecca is now heading to eastern Europe before making her way to the Mediterranean and then northern Europe, with a few stops in the UK and Germany in-between. At the end of the trip, she hopes to present something that compares other EU countries with the UK on topics such the economy and migration, as well as offering a perspective on Europe from the Brits who probably understand it best.

“Everybody has an opinion but everybody knows they don’t know enough about it. What I’m really interested in is ‘OK you live in a European country, what did you think about when you moved?’,” she explains. Although there is a tendency in the UK to picture British 'expats' on the continent as sun-kissed retirees living out their years in the Costa del Sol, the reality is much more diverse. “The variety has really surprised me,” she says, adding that she’s already met people from across the political spectrum.

What a lot of Brits abroad do have in common, however, is the tendency not to vote in national elections. In the months leading up to the last UK general election in May 2015, only around 22,000 of the 5.5 million eligible Brits living abroad were signed up to vote, according to the UK's Electoral Commission. With much more at stake in the referendum for those living on the continent, it is hoped that turnout in June will be higher. Those who have lived outside the UK for longer than 15 years are banned from taking part, however, and Rebecca is finding many are feeling disenfranchised.

“In lots of ways people who live outside the UK are going to be more tangibly affected, they have more immediate fear as to what will happen to their position,” she says. “Those people who can’t vote, they say ‘I’m not sure I should vote in a general election but this issue does affect me’. If your citizenship is British and you have no right to vote in national elections in your adoptive country, you are sort of a bit lost, starting to feel a bit stateless.”

With three months to go, Rebecca still has time to make up her mind on the UK and Europe, although the more people she meets, the more she realises that it does come down to a feeling of the heart.

“I started with that feeling in my heart that I’m a European and then I thought no that’s not sufficient, I need to know the facts, and now I’ve sort of come full circle again,” she explains.

“I’ve got a lot more to find out but now I feel there is this huge bit of it which is ideological and that’s OK. We can’t avoid the fact that we are an island and this is a test of where we want to fall, how we see ourselves and our identity. In a way that’s kind of OK.”