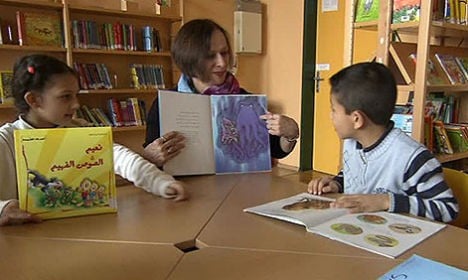 Vienna school director Andrea Walach had warned of “a lost generation” of children of migrant families at her school due to their difficulty learning German.

She estimated that a third of those who do not speak good German would struggle in later life because they are “not employable” and would rely on further state support.

After she gave an interview to the Kurier newspaper at the weekend, the headteacher received a letter that had been sent from the Education Ministry to the school inspector, where they suggested the inspector might like to offer her some guidance.

“And, if I had so few ideas, I should take care not to make my views known publically,” she said, describing what the Ministry wrote in the letter that was forwarded on to her.

The ministry told the newspaper that they wouldn’t enforce a gagging order on the teacher, although the Education Minister has not commented on the issue as she is away on a state trip.

Walach says that around 98 percent of students at her middle school don’t see German as their mother tongue, including both refugees who have recently arrived to Vienna and children who are born in Austria to migrant families.

“There are children who were born in Vienna, whose parents have already lived in Vienna for many years, but who have been brought up in their mother tongue for the first six years, barely know a word of German, haven’t read any picture books or watched German language TV. That means if they come to school they begin with language acquisition,” she said in an interview with the ORF this week.

Nationwide, around one in five children speak a foreign language at home and in Vienna’s Kindergartens around 58 percent of children don’t speak German as their mother language.

The headteacher added that her teachers are already stretched providing extra lessons and support should come from other areas, such as social workers, as the circumstances some of the children live in “are so complicated”.

“I know that the teachers need vigorous support from support staff. It shouldn’t be the teacher calling the house early in the morning, waking up the child and saying ‘you should come to school now’. For that, I would like to have support staff, for example social workers,” she said.

Bolstering the support from social workers in Vienna schools is already under discussion in the city council, which has pledged to set aside €24 million for this purpose.

Walach added that she believes making it mandatory for children to attend kindergarten for at least two years before school is one solution.

Many opposition parties have criticised the apparent attempt by the Education Minsitry to silence the teacher, with the Green party submitting a question to parliament asking if that was the usual way they responded to teachers' concerns.

Green Party chairman David Ellensohn said: “We should not allow Vienna teachers to be silenced. We need to hear this information first hand in order to respond appropriately.”