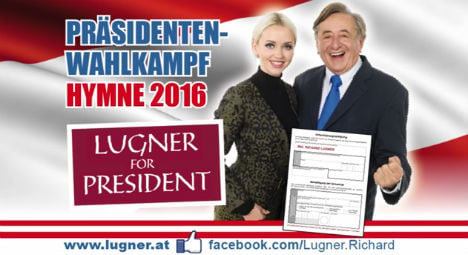 Millionaire Richard Lugner, an 83-year-old society figure, made his money through the building and retail industries. He is more famous world-wide, however, for reportedly saying he found Kim Kardashian annoying when she was his guest at the 2015 Opera Ball.

Celebrity gossip aside, Lugner has long had ambitions to enter Austrian politics and is currently hoping to get on the ballot for the Presidency, which is being voted on in April.

Ever contrary, he has now written a rap song that he performs himself in a new campaign video trying to get people’s signatures in support of his candidacy. The aspiring politician is still short 2000 signatures needed to enter the race.

The Local has had a go at translating some of the lyrics, which reference among other things his business objectives for Austria and his 24-year-old German playboy wife Cathy Schmitz, although we find they are best read out-loud in the original dialect.

English: “So come on, get cracking, then I will soon have the Hofburg rocking!”

Political meaning: “Please be so kind as to give me your signatures so I can become President.”

English: “As President I would also build a fence at the eastern border. Then the Viennese would not be forced to go to Hungary to do shopping on a Sunday!”

Political meaning: “I will prioritise the policies that affect Austria the most and ensure your lives become easier.”

English: “My first lady is a charmer! I feel years younger. Cathy is so attractive/smart, my enemies are green with envy!”

Political meaning: “I am very please to have my beautiful wife beside my side and supporting my political campaign.”

Watch the full video here but be warned – it's catchy!