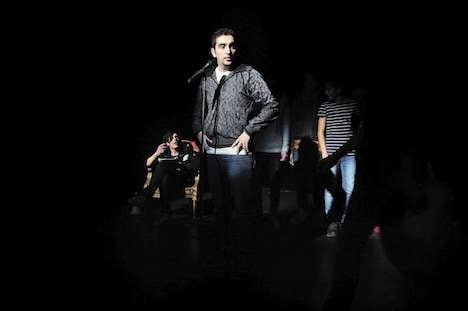 Johnny Mhanna performing at the Schauspielhaus in Vienna in "Die Schutzbefohlenen" ("The Protégés") based on a play by Austrian Nobel Prize Laureate Elfriede Jelinek. Photo: UNHCR/Mark Henley

Sitting in the auditorium of the Schauspielhaus, one of Vienna's leading experimental theatres, the 24-year-old Syrian laughed: “Of course, I now smell it here too.”

After a risky escape from Lebanon and an anxious time since he arrived in Vienna in August 2015, he has just learned that he has been granted asylum in Austria – a happy end to years of uncertainty.

Johnny, who grew up in a Syrian Christian family, studied drama and French literature, and dreamed of Hollywood.

His dreams and plans began to fade when the country descended into civil war in 2011. Johnny's father, a businessman, was arrested and was found dead after three days in prison. By 2012, the threat of military service loomed.

“To be on the safe side, I left three months before I was supposed to turn up at the army barracks,” he said. Shortly before Christmas 2012, Johnny left Damascus and crossed the border into Lebanon.

“My grandmother on my mother's side is from Lebanon, so I could always relate to the country and its culture,” he said. “But the first year was hard, even though they speak the same language, but with a different accent.”

At the beginning of 2015, however, life in Beirut became impossible. The Lebanese government imposed visa restrictions on Syrian refugees, which included the requirement for a Lebanese sponsor.

Those registered as refugees with UNHCR could stay only if they pledged not to work. Johnny was able to renew his status, but how could he survive without a work permit? Johnny Mhanna, (with moustache) in rehearsal for the theatre play 'Outsiders' about diverse people trapped on a Metro train, with a script that evolved out of rehearsals.  Photo: UNHCR/Mak Henley

“I signed the paper pledging not to work in Lebanon, but if the police had caught me the fine would have been 3 million Lebanese pounds, almost 2,000 dollars. And I couldn't find a Lebanese sponsor. What to do?”

In August 2015, Johnny decided to set off on the dangerous journey to Europe, hoping to reach Vienna where two of his uncles lived.

For the second time, he set out to begin a new life. “It's really hard, but once you decide to leave, you can't look back,” he said. “Once you buy the ticket for the trip to Turkey, you should forget your past.”

With 45 other refugees, he reached the Greek island of Lesbos after a harrowing journey of more than two-and-a-half hours across the Aegean Sea in a rubber dinghy.

Once in Mytilini, the capital of Lesbos, Johnny got a message from his aunt in Vienna on WhatsApp. She passed on an ad for a Viennese theatre which said “looking for refugees with experience in theatre production”.

“I said to myself, how many refugees are there with theatre experience – one, two, three, four, five? Not too many. I'll have a good chance.”

Before leaving Lebanon, Johnny was sure he would have to give up acting for a few years in Austria because he did not speak German. Once he arrived at the initial reception centre, however, things turned out differently.

Within days he was chosen by the artists' collective “Die schweigende Mehrheit sagt Ja” (“The silent majority says yes”) to perform in “Die Schutzbefohlenen” (“The Protégés”), based on a play by Austrian Nobel Prize winner Elfriede Jelinek.

She wrote the drama after a group of refugees sought asylum in Votivkirche, a church in Vienna in November 2012.

The ensemble was made up of refugees with six professional Austrian actors. Among the refugees Johnny was the only one with experience as an actor. Only a month after he had travelled more than 2,000 kilometres from Beirut as a refugee, he was on stage for the production's September 12 premiere.

He is full of praise for the Austrian people. “I was very rarely treated as the stereotype refugee. What I really love here in Austria is how much people respect one another. The six Austrian actors are now very good friends, amazing people. They don't abandon you after an evening at the theatre.”

While on tour with the artists' collective, Johnny decided to follow up the message his Aunt had sent him and went to an audition for “Outsiders”, an experimental play in which 13 people from different backgrounds are stranded in a subway train when it breaks down.

Johnny plays two parts, one a tourist who is transformed into a bug and the other a teenager from Tyrol with a heavy Austrian accent.

The director, Jakub Kavin, was impressed by Johnny's attitude: “It was a great gift for me to work with a Syrian professional actor,” he said. “Right from the beginning he was totally focused and concentrated.”

Johnny is looking forward to a new life in Austria. “It's beautiful to learn new languages and to meet new people,” he said. “I just love the idea of working as a professional actor in three different countries.”

Naturally, Johnny misses his friends and family in Damascus and Beirut, especially his mother who still lives in Damascus. He hopes the war in Syria will end sooner or later, but cannot imagine living there again. Too much has happened.

“Once the war is over, I might teach Austrian actors Arabic and send them to Syria to act,” he said with a smile.

By Henriette Schroeder in Vienna / Story courtesy of UNHCR

The EU home affairs commissioner Ylva Johansson, speaking after a meeting of European interior ministers, said she welcomed what she saw as new momentum on the issue.

In a reflection of the deep-rooted divisions on the issue, France’s Interior Minister Gérald Darmanin – whose country holds the rotating EU presidency – said the process would be “gradual”, and welcomed what he said was unanimous backing.

EU countries backed a proposal from French President Emmanuel Macron to create a council guiding policy in the Schengen area, the passport-free zone used by most EU countries and some affiliated nations such as Switzerland and Norway.

Speaking before the meeting, Macron said the “Schengen Council” would evaluate how the area was working but would also take joint decisions and facilitate coordination in times of crisis.

“This council can become the face of a strong, protective Europe that is comfortable with controlling its borders and therefore its destiny,” he said.

The first meeting is scheduled to take place on March 3rd in Brussels.

A statement released after the meeting said: “On this occasion, they will establish a set of indicators allowing for real time evaluation of the situation at our borders, and, with an aim to be able to respond to any difficulty, will continue their discussions on implementing new tools for solidarity at the external borders.”

The statement also confirmed EU countries agreed to take a step-by-step approach on plans for reforming the EU’s asylum rules.

“The ministers also discussed the issues of asylum and immigration,” it read.

“They expressed their support for the phased approach, step by step, put forward by the French Presidency to make headway on these complex negotiations.

“On this basis, the Council will work over the coming weeks to define a first step of the reform of the European immigration and asylum system, which will fully respect the balance between the requirements of responsibility and solidarity.”

A planned overhaul of EU migration policy has so far foundered on the refusal of countries such as the Czech Republic, Hungary, Poland and Slovakia to accept a sharing out of asylum-seekers across the bloc.

That forces countries on the EU’s outer southern rim – Italy, Greece, Malta and Spain – to take responsibility for handling irregular migrants, many of whom are intent on making their way to Europe’s wealthier northern nations.

France is pushing for member states to commit to reinforcing the EU’s external borders by recording the details of every foreign arrival and improving vetting procedures.

It also wants recalcitrant EU countries to financially help out the ones on the frontline of migration flows if they do not take in asylum-seekers themselves.

Johansson was critical of the fact that, last year, “45,000 irregular arrivals” were not entered into the common Eurodac database containing the fingerprints of migrants and asylum-seekers.

Earlier, German Interior Minister Nancy Faeser suggested her country, France and others could form a “coalition of the willing” to take in asylum-seekers even if no bloc-wide agreement was struck to share them across member states.

She noted that Macron spoke of a dozen countries in that grouping, but added that was probably “very optimistic”.

But he cautioned that “we cannot let a few countries do their EU duty… while others look away”.

France is now working on reconciling positions with the aim of presenting propositions at a March 3rd meeting on European affairs.

IMMIGRATION
How Europe’s population is changing and what the EU is doing about it
Url copied to clipboard!