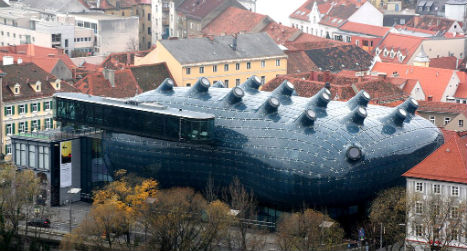 We've compiled a list of some of the country's more unusual structures, from the world’s fanciest bus stops to upside-down houses. Not just a great façade, many of those listed below also have interesting things inside them and are well worth paying a visit to.

This gigantic amphibious building makes a refreshing change from the more traditional architecture in the capital of Styria. Created by designers Colin Fournier and Peter Cook when the city was the European Capital of Culture in 2003, Kunsthaus Graz – sometimes known simply as 'the Bubble' – is a contemporary arts centre and one of the city’s most popular attractions. They host regular tours in English, giving an overview of what's on inside and some of the more interesting architectural features (next one is on March 6th ). Local Nicki Neffe approves, saying the building helps to connect the city to the river. “I like it because it’s a nice contrast to the old buildings and gives off a fresh, sort of 'watery', look,” he said.

The Brutalist-looking Church of the Most Holy Trinity – otherwise known as Wotrubakirche – in Vienna's Liesing district was actually designed by a sculptor rather than an architect. Fritz Wotruba, from whom the building takes its name, was a sculptor in the early to mid twentieth century who became inspired by cubism and started working on this church as a piece of cubist artwork in 1965. With the support of architect Fritz Gerhard Mayr, the church was finally finished in 1976, one year after Wotruba's death. Made of 152 different-sized concrete blocks, the building is a cubist piece also considered as one of Austria's finest examples of 20th Century architecture. Really more of a fun house attraction than an architectural wonder, this 'Upside Down House' in the municipality of Terfens is nonetheless a sight to behold. Literal German at its best, this is simply ‘a house standing on its head’. It also contains furniture stuck to the ceiling – or is it the floor? Great for children, the house offers family tickets and is open for visitors 10am-4pm between November and April and later in the evening in the summer. A trip to the shops was never the same again after a global architecture competition resulted in the small Austrian village of Krumbach getting seven of the world’s fanciest bus stops. The project started with a “vague idea” about renovating the village’s local transport services but ended up involving a team of 300 people and architects from seven different countries. They were invited to come to the Vorarlberg village to work with local craftsmen and architects to design the bus stops, seven of these were built in 2014. The one featured in this photograph is by Japanese architect Sou Fujimoto. When thinking of examples of 20th Century Austrian architecture, it’s impossible not to pay homage to Friedensreich Hundertwasser. An Austrian artist, environmentalist and architect, Hundertwasser strongly believed in the connection between nature, life, and beauty, which resulted in unique and colourful pieces of work. His buildings are featured around the world, although Austria is home to some of the best. Tourists normally flock to the Hundertwasserhaus in Vienna’s Landstrasse district but those wanting to avoid the crowds might like to pay a visit instead to the city’s Fernwärmewerk Spittelau, built between 1988-1992. Hundertwasser had initially not been keen on the idea of designing a waste incinerator but after he was told that the by-products will also heat 60,000 local homes in the local, he agreed.

Want to find out more about quirky or innovative architecture in Austria? Pay a visit to Vienna' Architecture Centre in Museumsquartier or join one of the 'Ugly Vienna' tours run by spaceandplace. 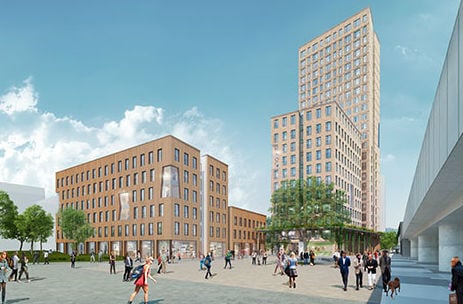 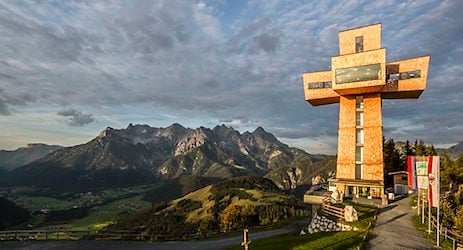