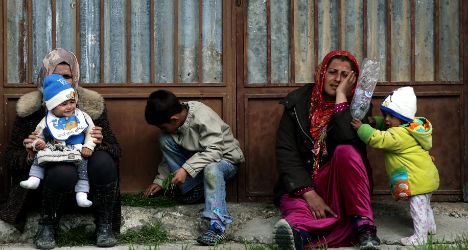 The talks will follow the unveiling of a massive emergency aid plan from the European Union to help its members cope with the influx.

The stops in Athens and Ankara are part of a regional tour which has also seen Tusk travel to Slovenia. He will meet Turkish President Recep Tayyip Erdogan in Istanbul on Friday ahead of a summit on the crisis on Monday.

“We should end Greece's policy which consists of allowing (them) to head north,” said Sebastian Kurz in an interview with the Sueddeutsche Zeitung.

“Those who manage to arrive in Greece should not be allowed to continue on their journey,” he said.

“We are working towards getting Greece to set up 'hotspots' with the help of the EU, in order to take charge of these people and we are applying pressure because nothing is happening,” added Kurz.

“Hotspots” are centres where migrants are registered and screened for those eligible for asylum in the European Union and those who will face eventual deportation. The facilities are currently being installed in Greece and Italy — the two main arrival points in the EU for hundreds of thousands of migrants.

After several months of delays, Greece opened four out of five hotspots on its islands in mid-February.

With these hotspots, “we are offering aid to those who need protection, but we cannot allow them to continue on their journey,” Kurz said.

For him, September's decision by Austria and Germany to open Europe's borders to refugees was a “serious mistake” that has to be fixed urgently. While Vienna has since said it would take in only 37,500 asylum seekers this year, German Chancellor Angela Merkel has resolutely refused to impose a quota.

She has also said that Greece must not be left alone to shoulder the refugee burden, although this week she said newcomers did not “have the right to determine in which country they wish to seek asylum.”

The EU on Wednesday proposed a €700 million emergency aid plan to help Greece and other countries deal with Europe's worst migration crisis since World War II.

It is the first time the 28-member bloc has responded to a situation within its borders in the same way as it treats humanitarian disasters in developing countries.

The United Nations has warned of a looming humanitarian crisis as thousands of people remain stuck in miserable winter conditions on the Greece-Macedonia border after Balkans states and Austria capped the numbers arriving.

With Macedonia still tightly restricting passage through its border with Greece, only around 500 Syrian and Iraqi refugees have been allowed to cross since Tuesday, Greek police said.

As people continue to land by boat on Greek islands from Turkey, fleeing war and misery in the Middle East and elsewhere, the EU estimates that more than 12,000 may currently be stuck at Idomeni on the Macedonian border.

Misery at the Macedonia border and in Calais

With refugees arriving independently at the Macedonian border rather than taking buses provided by the Greek government for fear of delays, Greek police say it is impossible to accurately track their numbers.

Greece has been the main point of entry for the 1.13 million migrants who have arrived in the EU since the start of 2015.

“No time can be lost in deploying all means possible to prevent humanitarian suffering within our own borders,” EU Humanitarian Aid Commissioner Christos Stylianides said Wednesday as the emergency funding plan was unveiled.

At the Idomeni border camp, bleak scenes played out Wednesday with refugees in mud-soaked fields queuing for hours for a sandwich, as aid agencies reported a lack of food and tents and warned that the wintry weather was taking a toll on people's health.

In the French port of Calais, demolition workers razed makeshift shelters in the so-called Jungle migrant camp for a third day running under the close watch of dozens of police officers equipped with water cannon.

The camp is a magnet for people hoping to reach Britain and many have refused to leave, although there has been no repeat of the violent clashes that erupted on Monday. French President Francois Hollande and British Prime Minister David Cameron were to hold a summit in France on Thursday, with the Calais situation top of the agenda.

Ahead of the talks, French state secretary for European Affairs Harlem Desir announced that Britain would provide an extra €20 million in funding to boost security at Calais, on top of the current €60 million.

The apparent show of European solidarity with the new emergency fund masks growing criticism of countries that have capped the number of migrants they are willing to let in.

European leaders are divided ahead of two summits this month on the migration crisis, with German Chancellor Angela Merkel saying that debt-hit Greece must not be allowed to plunge into “chaos”.

The crisis has also raised fears for the EU's Schengen passport-free zone as more states bring back border controls.

Tusk on Wednesday defended the use of barbed wire fences against migrants, saying that securing the Schengen area's outer borders was a “pre-condition” to solving the refugee crisis.

“I'm afraid that sometimes you need tougher measures if you, we want really to apply   Schengen. Sorry but this is the reality,” Tusk said during his visit to Slovenia.