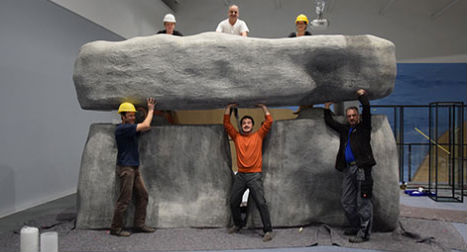 The 4000-year-old monument, the purpose and construction of which has baffled scientists for centuries, is being reconstructed to scale in MAMUZ Museum Mistelbach in Lower Austria.

Although it is not know for sure how the original stones – some weighing up to 50 tonnes – were moved from locations around Britain to the site in Wiltshire, west of London, researchers have suggested it would have taken hundreds of men and a complicated rope pulley system.

Visitors will be able to get up close and personal with the seven-metre-tall stones and even touch them, an experience that has been banned at the original Stonehenge due to fears that it would destroy the monument.

The exhibit, which opens March 20th, will also feature information about discoveries made in Lower Austria that archaeologists have described as much earlier versions of Stonehenge, which show how the region transitioned between the Stone and Bronze ages.

But according to the head of the museum Matthias Pacher, who helped to set up the exhibit: “The stones are the big hit.”

It is partly coordinated by the Ludwig Boltzmann Institute for Archaeological Prospection and Virtual Archaeology, who were involved in a previous four year project with Britain’s Stonehenge Hidden Landscapes Project to survey the landscape surrounding the original Stonehenge site.

In that project the Austrian team helped to unearth 15 previously unknown monuments, including henges, barrows, segmented ditches and pits.

Other discoveries made in Burgenland also show evidence of Austria’s own stone circle history.

Aerial photographs taken of the outskirts of the town of Rechnitz showed circular trenches dating back to the Neolithic Period, believed by experts to represent a giant calendar and a place for rituals.

There are many theories about the original purpose of England's Stonehenge, including suggestions that the site was a burial ground, a pilgrimage spot for spiritual healing, a astronomical tool, or even a place to play music.