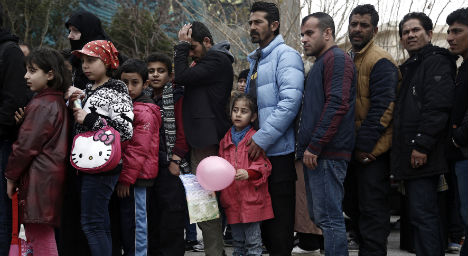 Refugees and migrants arrive at the port of Piraeus near Athens. Photo credit: EPA/YANNIS KOLESIDIS

Tusk said in Vienna at the start of a tour ahead of an EU-Turkey on March 7th summit that Europe can provide “substantial financial support” to neighbours of war-torn Syria such as Turkey.

“But at the same time we expect a more intensive engagement from our partners as an absolute precondition to avoid a humanitarian disaster,” Tusk told reporters after meeting Austrian Chancellor Werner Faymann.

After visiting Austria and Slovenia on Tuesday and Croatia and Macedonia on Wednesday, Tusk is expected in Athens and then Ankara on Thursday to meet Turkish Prime Minister Ahmet Davutoglu.

The March summit in Brussels will see Davutoglu and the leaders of the 28 EU states discuss the progress of last November's EU-Turkey deal aimed at cutting the flow of refugees and migrants.

Under that deal, Turkey agreed to tackle people smugglers and improve conditions for Syrian refugees in exchange for €3 billion and speeding up Ankara's EU membership bid.

But alarm is growing in EU capitals as thousands of people are still reaching the Greek islands from Turkey after more than one million made the perilous journey last year.

Failure to make progress at the summit will spell “disaster” for the bloc, EU migration commissioner Dimitris Avramopoulos said last week, with its passport-free Schengen zone at risk.

Relations with Turkey have been increasingly tense, with Erdogan even threatening to flood Europe with refugees if Ankara did not get more help during a November visit by Tusk and European Commission chief Jean-Claude Juncker.

Speaking in Vienna, Tusk said EU members had to “fully apply” the Schengen border code and restore effective controls on the EU's external frontier in Greece.

He said he was “opening a new chapter of our struggle with the migration crisis called 'Back to Schengen'.”

“It's not an easy decision but the truth is there is no alternative to (Schengen),” he said.

“We must face together the humanitarian consequences of our decision. The country which we must support in particular is Greece.”

“A test of our European-ness will be, on the one hand, going back to Schengen, and on the other (having) a readiness to stand by Athens during these hard times.”

But in reference to unilateral new measures by Austria and countries through the western Balkans to limit migrant numbers, Tusk called on EU members to “coordinate more and better”.

“It is natural that important decisions are taken in the capitals but we need to make sure that these decisions are coordinated so they are effective, reinforce each other instead of eroding trust further,” Tusk said in Slovenia.

The tightening of border restrictions has led to a bottleneck of migrants and refugees in Greece, with several thousand stranded on the border with non-EU Macedonia.

On Monday Macedonian police fired tear gas at hundreds of people who tried to break through a border fence.