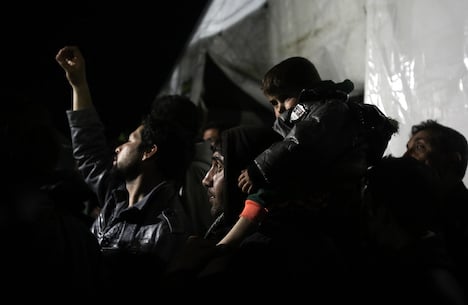 Refugees waiting at the Greek border to cross into Macedonia. Photo: EPA/SIMELA PANTZARTZI

Germany “should set up a daily quota and then bring these refugees directly from Greece, Turkey or Jordan,” Austrian Chancellor Werner Faymann told the Kurier newspaper on Wednesday.

“Austria cannot and must not become a distribution hub [for refugees]. There must be an end to that,” Faymann went on.

He could not accept “that several thousands of people are waved through every day, on the other hand Germany informs us that today it will only allow 1,000 or 2,000 into the country.”

“Anyone who closes national borders doesn't do anything against the causes for the refugee movement,” Chancellor Angela Merkel shot back.

The German Chancellor has long been fighting for a solution at the EU level to distribute refugees after they arrive in Greece and Italy.

But it's tough going, as many other national leaders accuse her of attracting more people to Europe with an open-door policy which Germany decided on alone.

“We have to find sustainable solutions that we will still be able to justify tomorrow,” Merkel said. “Above all, [we need] solutions that don't set up something on one side that other countries simply have to deal with.”

Thousands of people remain stuck at Greece's northern borders after Macedonia – not a member of the EU, but invited to Austria's western Balkans conference last week – closed its gates.

People crammed into the camps up against the border fences on Tuesday called on Merkel to resolve the situation and let them continue their journeys.

“I don't know what the EU states are waiting for – how much further must the situation escalate?” Selmin Caliskan, General Secretary of Amnesty Germany, told the Neue Osnabrücker Zeitung on Wednesday.

Germany is looking to an EU-Turkey summit in Anakara on March 7th to make progress in bringing refugee flows under control.

“No-one understands if the EU first keeps Greece in the Euro with billions [in aid] and now fobs the solution of the refugee crisis onto the country,” Justice Minister Heiko Maas told the Rheinische Post on Wednesday.

“The images from the border between Greece and Macedonia should be a spur to all of us to fight more decisively for a European solution.”