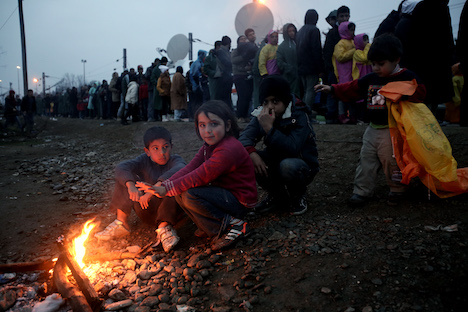 In a sign of deepening divisions within Europe, German Chancellor Angela Merkel lashed out at Austria and Balkan states for introducing tight limits on migrant entries, leaving Greece with a growing bottleneck as refugee boats continue to arrive from Turkey.

And Macedonian President Gjorge Ivanov warned that once Austria reaches its cap of a maximum 37,500 migrants transiting through this year, the refugee route through the Balkans will have to close.

At Idomeni on the frontier, Macedonian police fired tear gas as some 300 migrants forced their way through a Greek police cordon and raced towards a railway track between the two countries.

“Open the borders!” they shouted as a group of men used a metal signpost to bring down a section of barbed wire fencing, prompting police to fire volleys of tear gas and block them from crossing.

At least 30 people, many of them children, requested first aid in the stampede that ensued, the charity Doctors Without Borders (MSF) said.

Authorities said a Macedonian policeman had also been hurt and had to be hospitalised. Greek policemen try to prevent refugees, who stay in the buffer zone at the refugee camp in Idomeni, Greece, from crossing the railway lines, as they wait to be allowed to cross the border with FYROM, 29 February 2016. Macedonian police fired tear gas at hundreds of migrants after they stormed a metal fence along the border with Greece on 29 February, as refugees were blocked from travelling between the two countries on the main route to Western Europe. EPA/SIMELA PANTZARTZI

With Austria and Balkan states capping the numbers of migrants entering their soil, there has been a swift build-up along the Greece-Macedonia border with Athens warning that the number of people “trapped” could reach up to 70,000 by next month.

The UN's rights chief criticised a “rising roar of xenophobia” towards migrants.

“To keep building higher walls against the flight of these desperate people is an act of cruelty and a delusion,” Zeid Ra'ad Al Hussein said.

Amnesty International criticised the situation at Idomeni, branding it “the result of a shameful spate of discriminatory border closures”.

As the bottleneck showed little sign of easing, Merkel slammed the restrictions and pointed the finger at Austria, whose clampdown on February 19 triggered a domino effect in the Balkans.

Greece must not be allowed to “plunge into chaos”, she said.

The spate of border closures was sparked by Austria's announcement it would accept no more than 80 asylum claims per day and that a maximum of 3,200 migrants would be allowed to transit through daily.

EU members Slovenia and Croatia, along with Serbia and Macedonia, swiftly responded to the clampdown further up the migrant route by imposing a limit of 580 migrants entering per day.

“Because Austria decided on a limit of 80 per day, and not one more, we have reached today's situation,” Merkel told public broadcaster ARD on Sunday.

“When one insists on his border, the other suffers. That's not my Europe.”

Macedonia's President Ivanov told German news website Spiegel Online that once Austria's limit of 37,500 entries this year is reached, the Balkan route will have to close.

“When Austria reaches its limit, it will happen,” he said.

Asked when that might occur, he replied “perhaps right at this moment”, although the Austrian interior ministry said only around 12,000 people had passed through its territory so far this year.

The European Commission said late Monday it will this week propose using funds usually earmarked for catastrophes outside the bloc to provide aid to EU countries affected by the migrant crisis.

On the ground, thousands continued to mass on Greece's northern border with Macedonia, where the Idomeni camp is designed to accomodate up to 1,500 people but is sheltering more than 7,000.

Austria hit back quickly at criticism of its crackdown, describing it as “absurd”.

“We don't have to take criticism from anyone on any side,” Interior Minister Johanna Mikl-Leitner told the Austria Press Agency.

“Apparently for some, the European solution (to the crisis) is for all (migrants) to mass in Austria,” she said.

In Athens, ministers held an emergency meeting on how to handle the crisis.

With facilities in the capital nearing breaking point and hundreds of people continuing to arrive at the port of Piraeus, authorities hastily opened two indoor facilities — one of them at a baseball stadium disused since the Athens 2004 Olympics — to shelter another 2,000 migrants.

In France meanwhile, clashes broke out as authorities began bulldozing half of the “Jungle” migrant camp in the port city of Calais where thousands of migrants hope to sneak aboard lorries and ferries to Britain.

Belgium has turned back 619 migrants at the French border since reinstating border checks, a police spokesman told AFP.