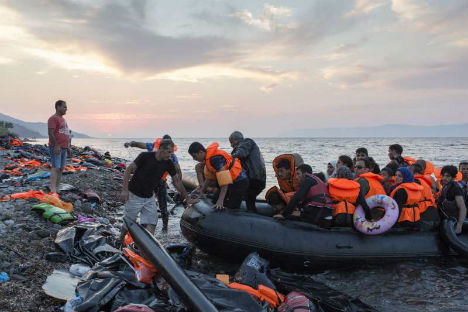 “A summary of the meeting will be provided at talks between (EU) interior and justice ministers on Thursday in Brussels,” he said.

Greece's foreign ministry said that being left out meant that the conference was “an attempt to take decisions in Greece's absence that directly affect Greece and Greek borders.”

Greece has also accused Austria of undermining efforts to reach a joint European response to the migration crisis by siding with hardline EU members who refuse to take any refugees.

Vienna has moved closer to the Visegrad Four group — Hungary, Poland, Slovakia and the Czech Republic — in their call for tighter EU controls inside the passport-free Schengen zone.

“One must recognise that Austria has already taken 100,000 refugees… but I think it is making a very big mistake by placing itself alongside these countries,” junior interior minister for migration Yiannis Mouzalas told Vima radio on Monday.

Vienna last week also introduced a cap of 80 asylum-seekers per day and said it would only let 3,200 migrants pass through each day, sparking fears of a domino effect along the Balkan migrant trail.

The limits have also seen Austria come under fire from the EU commissioner for migration and Germany's interior minister.