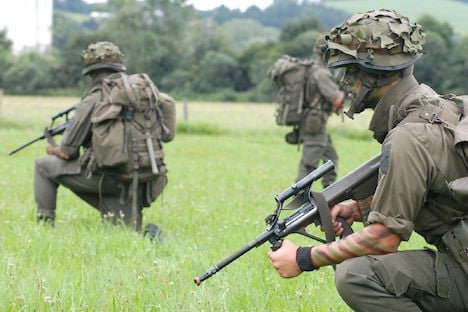 The increase to 1,450 soldiers and reservists comes after Austria drew criticism last week for saying it would only accept 80 asylum seekers and let 3,200 migrants pass through the country per day.

The troops will assist police carrying out checks on people and vehicles entering the country, patrol the “green border” and carry out surveillance work, the defence ministry said.

Also a company of military police based in Salzburg “will be held back to be able to handle violent persons or groups of persons and prevent them crossing the border,” the ministry said.

“These forces will be able to deploy all over the country and be brought into action using army helicopters at short notice as the interior ministry requires,” it said in a statement.

There will also be two armoured personnel carriers and three military transport vehicles ready to “close gaps in the border at short notice,” as well as a company of military engineers on standby.

In September the government approved the deployment of up to 2,200 military personnel “to help ensure a controlled and ordered handling of the movement of migrants, and to maintain security and order in the country,” the statement added.

Austria last year took in 90,000 asylum seekers, making it one of the highest recipients in Europe on a per-capita basis, while almost 10 times as many passed through, mostly heading to Germany and Sweden.

Faced with public unease and an increasingly popular far-right opposition, Chancellor Werner Faymann's centrist government last week imposed the new cap in an attempt to slash the number of asylum seekers this year to 37,500.

On Sunday, Faymann was quoted as saying that he was “surprised” at the resulting criticism which saw the EU's migration commissioner call the limit “plainly incompatible” with EU and international law.

“We know already now that (without the cap) we would be well above the number of migrants that we can cope with by the middle of the year at the latest,” Faymann told the Kleine Zeitung daily in an interview.

“It would be politically negligent not to do something against that in good time,” he said.

He stressed that his unilateral “Plan B” steps were necessary because common efforts by the European Union to deal with the crisis “are not having the effect that they should be”.

Austria's measures have also raised worries of a dangerous backlog of migrants through the western Balkans from Greece when the flow rises as expected again in the coming months as spring arrives.

The government has invited interior and foreign ministers from these countries to Vienna on Wednesday for a meeting under the motto “Managing Migration Together”, the Austria Press Agency reported on Sunday.

Around 400 migrants entered Austria on Saturday, the day after the new cap entered into force.

Only a dozen applied for asylum, the others electing to travel onwards. Several hundred new arrivals were expected on Sunday, police said.