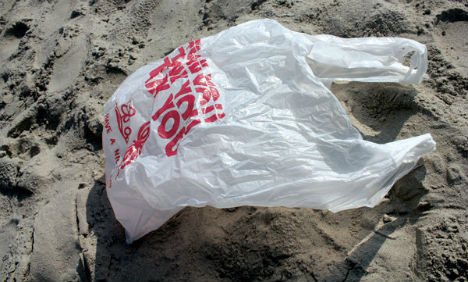 A plastic bag discarded on a beach.

Under new rules agreed last year, EU member states will have to ensure that by 2018, no more lightweight bags are given out free to shoppers, or to limit the use of bags to 90 per person per year by the end of 2019 and to 40 by the end of 2025. For now, the very thin bags used for fruit and vegetables in supermarkets are excluded from this agreement.

Denmark introduced a tax for all shops which gave customers plastic bags in 2003, which pushed the use of reusable bags. Denmark now has some of the lowest plastic bag use in Europe.

Scientists estimate that every square mile of ocean contains approximately 46,000 pieces of plastic floating in it. According to Austrian NGO Global 2000, 40 tonnes of plastic waste end up in the Danube river every year.

In Austria most big supermarket chains no longer provide single-use plastic bags and charge their customers for paper or reusable plastic bags. Many shoppers now carry fabric “bags for life” with them when they go grocery shopping. The environment ministry wants to gradually phase out plastic shopping bags altogether.

Nicole Berkmann from the Spar supermarket chain says that since Spar stores started selling reusable and biodegradable plastic bags ten years ago, around 15 percent of customers have switched to those. The Rewe chain has also been selling fabric bags, as well as reusable plastic and paper bags since the 1990s.

In the United States, hundreds of cities in the state of California have plastic bag bylaws forbidding their use, including Los Angeles and San Francisco. Chicago, Seattle and Austin also have bans.