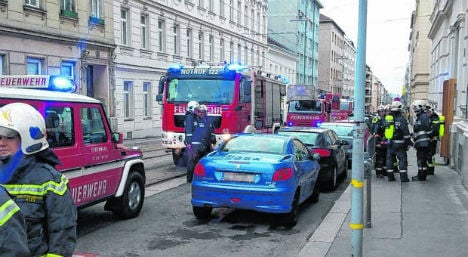 The teenager had found the grenade on a trip to Romania and thought he could impress his teacher and classmates by bringing it in.

The school in Knöllgasse, which has 700 pupils, had to be evacuated. “Shortly after 8am a teacher came into my office and said one of the pupils had an object that looked like a hand grenade,” school director Birgit Maria Fischer told the Kurier newspaper.

“I immediately alerted the emergency services and evacuated the school as we didn’t know whether it could explode,” she added. “I also had to warn the neighbouring primary school and tell them to evacuate their building as well.”

Within minutes, police, firefighters and explosives experts arrived at the school. However, it turned out to be a false alarm as “the grenade had no detonator and there was no danger that it would explode,” police spokesman Paul Eidenberger said.

All pupils were taken to a neighbouring school whilst police examined the grenade and Fischer said she told them it was a fire drill so they wouldn’t panic. After two and a half hours they were allowed back into their classrooms.

Last year, 530 students at a high school in Simmering had to be evacuated after two boys let off a stink bomb. 14 people had to be given first aid for nausea and eye irritation.