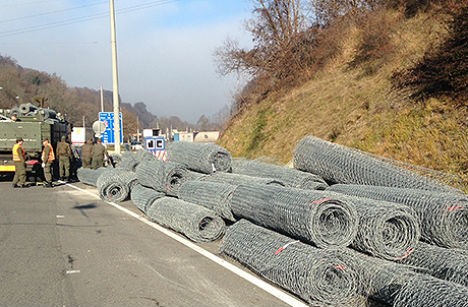 Construction of the border fence in Spielfeld. File photo: ORF

The two EU member states, which also belong to the passport-free Schengen zone, have become key transit nations for migrants and refugees trekking up through the Balkans to reach western Europe.

Austria, which has hardened its stance in recent weeks, will in the coming days announce a daily cap on the number of migrants allowed to enter the country via its main border crossing with Slovenia.

The country of nearly nine million people last year received 90,000 asylum claims, one of the bloc's highest rates per capita.

In anticipation of Vienna's move, the Slovenian interior ministry said it would also begin limiting the arrivals to avoid becoming a bottleneck.

State TV reported the tougher controls would start Monday morning and see the number of people allowed to cross the Sentilj checkpoint into Austria restricted to 1,000 per day.

Slovenia said in a statement released by its interior ministry it had informed neighbouring Croatia, the next country along the migrant trail, of its decision to bring in tougher border controls.

Hermann Muhr, the spokesman for Austria's Interior Minister Johanna Mikl-Leitner, confirmed to AFP Sunday that “a series of tougher measures will be announced in the course of this week including a daily quota of migrants, in line with what Germany is already doing”.

Last month, Vienna already warned it would cap this year's number of asylum claims at 37,500 and deport at least 12,500 people.

The continent is grappling with its worst migrant crisis since World War II, which shows no sign of abating.

Germany has been the main destination for most of the migrants once they land in Greece or other points in Europe.

Austria, along with the so-called “Visegrad Four” group — Hungary, Poland, Slovakia and the Czech Republic — is accusing Athens of failing to protect the EU's external borders.

The Visegrad Four will meet leaders from Macedonia and Bulgaria, which both share a border with Greece, in Prague on Monday to discuss reinforcing border controls.