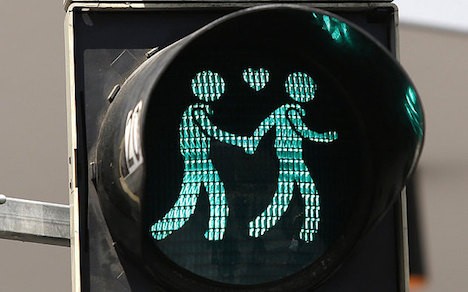 Instead of the usual stick man, the lights show same-sex couples holding hands, along with a small heart symbol. Some also depict heterosexual couples.

In December, the official in charge of traffic, Markus Hein of the far-right Freedom Party (FPÖ), announced he was pulling the plug on the signals, declaring traffic lights “should not be misused to impart advice on how to live your life”.

Hein's move triggered a showdown between the FPOe and other parties on the town council, who voted together to keep the new lights, intended as a symbol of tolerance.

Hein said Friday he would abide by the council's decision while awaiting the outcome of his appeal.

Gay-themed traffic lights first made an appearance in Vienna for the Eurovision Song Contest, which Austria hosted in 2015.

A nod to Conchita Wurst, the bearded Austrian drag queen who won the 2014 edition of the contest, they soon caught on, with Salzburg and Linz also taking them up.