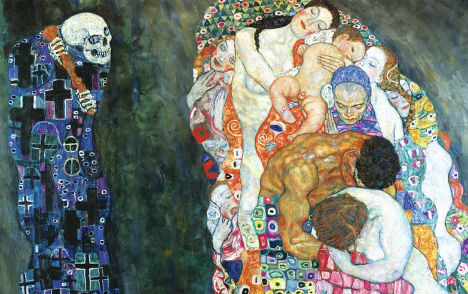 Around 185 pieces by Austrian artists, ranging from turn-of-the-century paintings to Art Deco chairs and lamps, are part of the unconventional Hidden Treasures exhibition.

Some, like Robert Russ's 1885 “Mill with Evening Sky”, reveal damaging tears in the canvas or heavily flaking paint.

Other forlorn pieces of artwork include a delicate porcelain figurine with its head missing, and the panel of an oil painting by Cecil van Haanen fallen victim to hungry woodworms.

“Usually you go to the museum to admire works in perfect condition. Here, we are showing the dark side of our collection,” the Leopold's new director, Hans-Peter Wipplinger, told AFP in a recent interview.

Boasting around 6,000 pieces, the museum has gained global fame for its outstanding array of 19th and 20th-century Austrian art.

Renowned highlights include paintings by the founder of Vienna's Secession movement, Gustav Klimt, and his protege Egon Schiele whose permanent exhibition at the museum is the largest of its kind in the world.

But the Leopold's collection also contains many lesser known gems that deserve to see the light of day again, according to Wipplinger.

“When I took on my role (in October 2015), one of the first things I did was to visit the museum's storage. I discovered a number of works worthy of being exhibited, but that were too damaged,” he said.

“That's how I got the idea of finding patrons willing to finance the repairs,” Wipplinger explained.

Mould from exposure to dampness, rusty metal parts, bent frames, bad touch-ups: the exhibition, which runs until February 22, illustrates the spoils and damages an artwork can suffer over the years.

“It's also about showing the public all the work and technical know-how required to present a piece in mint condition,”  Wipplinger said.

Many of the works have never been publicly shown, including rare Art Nouveau furniture by Koloman Moser, a co-founder of the illustrious Wiener Werkstätte arts collective.

Some paintings are in a fairly good state but too frail to travel. “Other museums often ask to borrow them, but they first have to be restored to survive the journey,” noted the Leopold director.

In recognition of their support, patrons will see their name displayed on a small card next to the work they helped finance.

At the exhibition's launch in late January, an elegant visitor in his sixties revealed he had flown in especially from Cyprus for the event. “I'm willing to spend money if I have a fancy for something — but it needs to be special,” the man, who only identified himself as Wolfgang, told AFP with a wink.

The museum which opened in 2001 is the brainchild of Rudolf Leopold, a visionary collector who began buying up Klimt and Schiele paintings in the aftermath of World War II, at a time when many considered the Austrian artists already outdated.

In 2010, the institution made worldwide headlines when it reached a $19-million settlement with a Jewish art dealer's estate in the United States over Schiele's “Portrait of Wally”, a masterpiece stolen by the Nazis.

US officials had seized the work in 1997 while it was on loan in New York. It was only returned to the Leopold after the museum agreed to the payout.

While the dust in that affair has since settled, the museum is still in negotiations with Austria's Jewish Community over several other Schiele drawings which were also looted by the Nazis during World War II.