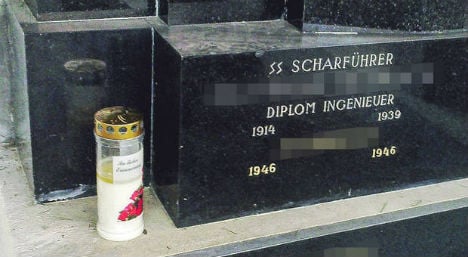 The lightning bolt runes stand for the initials of the SS. Photo: Private

The grave is that of Franz T., a man who held the rank of Scharführer (squadron leader) in the SS during World War II, and was a member of the Nazi Party.

“In my view it is unacceptable that in 2015 SS runes are still to be found on grave stones in Austria,” cemetery visitor Manfred A. told the Kurier newspaper. He said that if the runes are not removed he plans to take the company which manages Vienna’s cemeteries (Friedhöfe Wien GmbH) to court and sue them under the Nazi insignia law.

However, Friedhöfe Wien has said that it is aware of the gravestone but does not consider itself responsible. “Our hands are tied. The gravestone is not the property of the city of Vienna,” a spokeswoman told the Kurier.

She did not confirm whether Friedhöfe Wien would try and contact the owner of the grave.