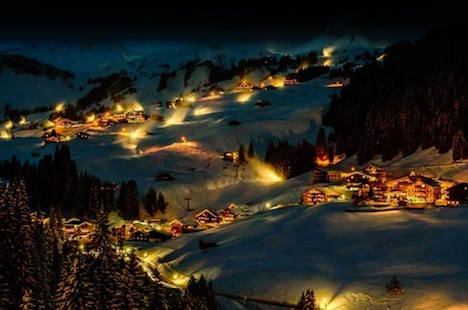 Such though was the destiny of “Stille Nacht”, premiered to a modest church congregation of ship labourers and their families in this small town in Austria on Christmas Eve, 1818.

The words, since translated into more than 300 languages and dialects — including Japanese, Welsh and Farsi — had been written as a poem by a priest, Joseph Mohr, in 1816, a time of great suffering in the wake of Europe's Napoleonic wars.

Two years later, Mohr asked his friend stationed in a nearby village, the organist, choirmaster and schoolteacher Franz Xaver Gruber, to compose a tune.

When Gruber duly obliged on December 24, the two men decided to sing it together that very evening at mass in Oberndorf church.

The organ was broken, according to legend because of nibbling mice, so Mohr played guitar.

Many years later in his 1854 “Authentic Account of the Origin of the Christmas Carol, 'Silent Night, Holy Night!',” Gruber recalled there was “general approval by all”.

This approval would snowball, although it is a bit of a mystery how exactly the song then spread.

It is thought that a key role was played by one Carl Mauracher, a master organ builder and repair man, who took the song back home to the Zillertal valley in the Tyrol region.

There it was adopted by two travelling singing groups, the Rainer Singers and the Strasser Siblings, who performed around Europe and beyond — including in the Rainers' case in the United States.

“They were the pop stars of the time,” said Anna Holzner from the Silent Night museum — home today to Mohr's guitar — in Hallein, where Gruber lived until his death in 1863.

An English version of the German original soon followed, and by the end of the 19th century it was being sung on all continents, its spread helped by Christian missionaries.

During World War I, legend has it that German and British soldiers in opposing trenches sang it at Christmas 1914, its call for peace sounding out over no man's land during a famous truce.

Since then the song has been recorded many hundreds of times by the likes of Bing Crosby — to huge success — and Elvis Presley, without forgetting John Denver with the Muppets and gravel-voiced satanic German rockers Erloesung.

This year, along with Cyrus', comes a new version bleated by goats released by the Swedish branch of charity Action Aid — part of an album entitled “All I want for Christmas is a Goat”.

Today, Mohr and Gruber are honoured in around a dozen sites locally, including in Oberndorf and in Hochburg-Ach, Gruber's birthplace where for the past 10 years locals have performed a special play every Christmas.

The original Oberndorf church — along with its pesky mice — was demolished at the beginning of the 20th century after being damaged by floods.

Today in its place stands a small chapel.

With stained glass windows depicting Mohr and Gruber, every December 24 thousands of people gather outside for a Christmas ceremony, including of course a rendition of “Silent Night”.