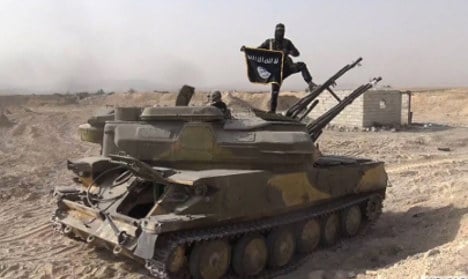 A photo of Isis extremists posted online in August. Photo: AP/uncredited
The teenager was arrested on Saturday after being reported missing from her home in Linköping in southern Sweden last week and placed on international police watch lists.
She was traced by officers after her family managed to track her phone and inform Austrian police. But officials in Vienna said on Tuesday that she was not suspected of any crimes in Austria.
According to Sweden's TT news wire, the prosecutor has asked the court handling the case to submit a request to Sweden to issue a European arrest warrant against the girl, who is 17.
“There has not yet been any contact with the Swedish judicial system,” said Christina Ratz, a spokesperson for the prosecutor.
“If the Swedish authorities say they do not want to continue the investigation (…) we will see if we can start an investigation against her regarding crimes in Sweden,” she added.
Henrik Jansen, a spokesperson for regional police in eastern Sweden, told TT that it was “not clear yet” how police would proceed.
“I just know that the social services department in Linköping will try to get the girl home,” he said, adding that Linköping municipality would bear the costs of any travel.
Torbjörn Lindqvist, a duty police officer, told Sweden's Expressen tabloid over the weekend that the girl's relatives had been concerned that she was developing extremist views prior to her disappearance.
“According to the family, the girl has been radicalized in recent times. She has watched several videos that are linked to Isis, and talked positively about Isis in certain contexts. The family has also found notes in which she expresses support for people who have been indicted in the UK for having connections to Isis,” he said.
READ ALSO: Why Swedish girls are leaving home for Isis
The teenager is understood to have been born and raised in Sweden and was attending a high school in Skäggetorp, an area of Linköping with a growing proportion of immigrant families and higher than average unemployment.
Two years ago Nade Ghaemi, a local council officer, warned that young people were being targeted by extremist recruiters.
However other muslims in the suburb have been quick to play down suggestions in the Swedish media that more teenagers may also have been interacting with Isis.
“It's the first time anyone from Linköping had these kinds of connections that I know of,” Abdiraham Musse, a spokesperson for the Mosque Foundation (moskéstiftelsen), told TT.
Swedish Security Service Säpo said in October that it believed around 35 women have travelled from Sweden to Syria and Iraq to join extremist groups.
Back in May, Magnus Ranstorp from the Swedish Defence University told The Local that while some women and teenagers were persuaded or forced to travel to the Middle East by friends and family members, others “look up to the fighters like pop stars” and leave home of their own accord.
“For a lot of the girls this is a form of emancipation in a perverse way. They think they are getting away from the leash of patriarchal structures in their families or the areas where they live,” he said.
More than 220,000 people have been killed in Syria's four-year war, which is increasingly dominated by jihadist groups.