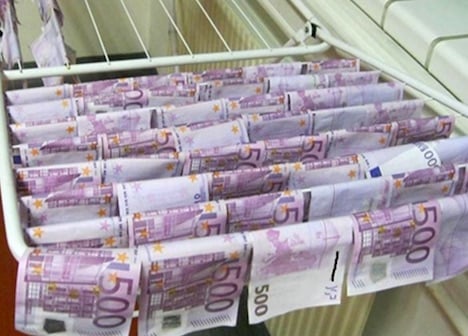 Fortunately, no one was injured, and the reason the two youths had jumped into the river in such cold temperatures was explained by the mysterious discovery of hundreds of banknotes floating in the water.

A police boat and fire rescue personnel were quickly on the scene, and were able to recover most of the floating money, which amounted to around €100,000, in a mixture of €500 and €100 notes. The money was floating in the river.  Photo: Vienna Police

“Of course, it is likely that the banknotes come from a criminal offence. But for now, we will have to wait for completion of tests, and the gathering of evidence.  That will take some time to complete,” police spokesman Roman Hahslinger said.

Police sources also indicated that the money was genuine, and that there had been no major cash robberies reported recently.

Austrian law stipulates that anyone who finds money and hands it in to the police can keep up to 10 percent as a reward, so the young men are likely to be compensated for their cold dip.

And if the original owner of the money isn't found within a year, the young men could keep the entire amount. The banknotes are now drying in the local police station.  Photo: Vienna Police