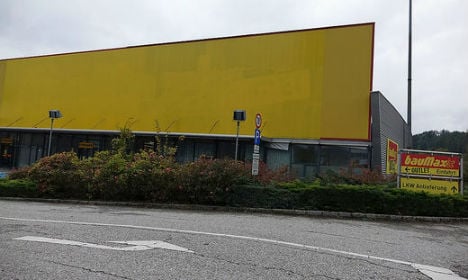 A group of young male refugees – all aged under 18 – got into a fist fight and then began attacking each other with wooden boards and stones. Three were injured, with broken noses, and had to be treated in hospital.

Thirteen police patrols were called to the camp to bring the situation under control.

The fight occurred at around 10.45pm at a former hardware store on the outskirts of Leoben, which has been turned into a temporary shelter for asylum seekers. Around 300 unaccompanied minors are currently housed there, along with a further 123 people who are mostly families.

The police said they separated the rival groups and took families with young children to a safe area.

25 youths aged between 16 and 17 are now in custody, where they are being questioned with the help of a translator.

Inspector Moisi said this was the first major incident at the shelter. The conversion of the former hardware store into a refugee camp was not popular with locals.

Leoben’s Mayor Kurt Wallner (SPÖ) wrote an open letter to Interior Minister Johanna Mikl-Leitner on Friday, saying that he had been against “such inhuman mass accommodation shelters” since day one. He said it was a “powder keg” which must be defused, and that he needed reinforcements for the local police force.

He added that he could not solve the problem alone, and that legally the mayor is not responsible for maintaining security in the city.  “This can’t continue. The number of refugees in the centre must be lowered dramatically,” he wrote.

He said that many locals had told him they no longer felt safe in the city. More than 100 refugees have been housed in private homes in Leoben, something which he said had been a success.

A spokesman from the interior ministry said that it was unlikely that the number of staff working at the asylum centre could be increased, and that social workers would be asked to look into the incident.