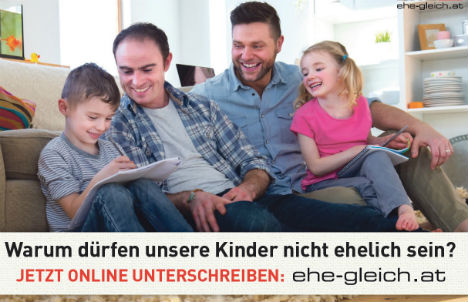 The children and their parents have taken their cases arguing for same-sex marriage to the Administrative Court in Vienna, and hope to change the law so that the children can become ‘legitimate'.

Campaigners from the Ehe Gleich group have set up a petition to lift the ban on same-sex couples and so far more than 45,000 people have signed it.

Dr Helmut Graupner is representing the families (four couples) and says that Austria must allow equal marriage, “for the sake of the children”. He said that he expects a ruling on the cases in January or February.

The Austrian government remains divided on the issue of gay marriage, with Social Democrat Chancellor Werner Faymann in favour and the conservative People’s Party against it.

On Thursday, Vienna’s Child and Youth Advocate said equal marriage would ensure that children’s rights are fully respected, helping them feel confident about their family’s stability and reducing discrimination.