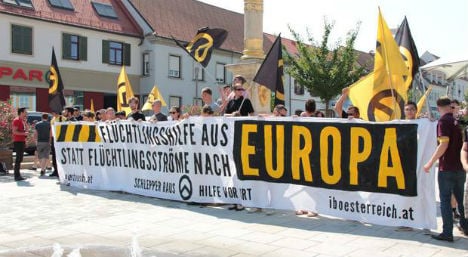 The Identitarian movement has grown in Austria. Photo: Leonardo Roman

The ministry said that there were significant increases in the areas of incitement and neo-Nazi activities.

The number of xenophobic and racist crimes in the first three quarters of 2015 was equal to the number reported for the previous three years, police figures showed. The interior ministry confirmed that this represented a real increase in crime, and not just an increased willingness to report racist and xenophobic crimes.

The number of neo-Nazi crimes which contravened the Prohibition Law rose by 25 percent in 2015. The number of 'serious crimes' increased by ten percent.

Police sources told Der Standard newspaper that the known ‘elders’ of the right-wing extremist scene were playing less of a role, and more crimes are being committed by younger right-wingers including associates of the Identitarian movement who operate on the edges of legality and are therefore hard to prosecute.

The non-governmental racism watchdog group ZARA said many racist or hate comments are made online, often as a reaction to postings or articles on migration.

She added that the increase in these sorts of crimes is the result of several factors, including the large number of refugees arriving in Austria and the recent regional election successes of the right-wing Freedom Party (FPÖ).

The police intelligence agency said that it had not seen a similar increase in crimes committed by extreme left-wing groups, of which there were 545 in 2014.