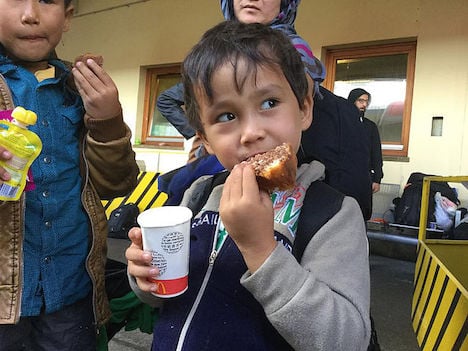 With the continent facing its biggest migration crisis since World War II, EU states have bickered for months on how to stem the flow and share out the new arrivals.

There have been steady calls from the right — and more emerged Sunday — for nations to be wary of the wave of people fleeing war and poverty in Africa and the Middle East.

“Not every refugee is an Islamic State terrorist. But to believe that there is not a single fighter among the refugees is naive,” Markus Soeder, a politician with the conservative Bavarian party CSU told the German press on Sunday.

“Paris changed everything” and “this is no time for uncontrolled immigration,” said Soeder, whose party has been critical of German Chancellor Angela Merkel's accommodating stance on refugees.

Yet on Sunday European Commission President Jean-Claude Juncker defended the line that “there is no need for an overall review of the European policy on refugees.”

The men made their comments days after a team of assailants launched coordinated attacks, claimed by the Islamic State group, in the French capital that killed at least 129 people.

The discovery of a Syrian passport near the body of one attacker has raised fears that some of the assailants might have entered Europe as part of the huge influx of people fleeing Syria's civil war.

Greek and Serbian authorities have confirmed the passport belonged to a man who registered as a refugee in October on the island of Leros and applied for asylum in Serbia a few days later.

Poland's incoming European Affairs Minister Konrad Szymanski said Saturday that Warsaw no longer considered an EU plan to redistribute refugees across Europe as a “political possibility” in light of the Paris attacks.

PEGIDA, the German Islamophobic movement, has predicted that attacks in Germany are inescapable “if we don't stop the avalanche of asylum seekers, if we do not properly secure our borders.”

More than 800,000 migrants have arrived in Europe by sea so far this year, mostly from the Middle East, with Germany alone expecting nearly a million migrants in 2015.

Other voices have called for calmer thinking. Germany's Interior Minister Thomas de Maiziere, has warned against any “swift links” between the Paris attacks and Europe's migrant crisis.

“Those who organised, who perpetrated the attacks are the very same people who the refugees are fleeing and not the opposite,” said Juncker.

“Those behind the attacks in Paris cannot be put on equal footing with refugees who are seeking asylum,” he said.

A source inside Juncker's entourage noted that his words do not mean there is flexibility to even partially review the 28-nation bloc's stance on refugees.

The Netherlands' Foreign Affairs Minister Bert Koenders noted that “closing the borders creates the illusion that we are safe. It's a fairy tale that does not help anyone.”

“We must not be naive. We have to check migrants so that we know who we are dealing with, but we need to be very careful when linking causes and effects,” he added.

“I understand this fear, and we cannot completely rule out” the presence of jihadists among the migrants, but “we are dealing with terrorism that took place both before and after the wave of migration,” Koenders said.

In Croatia, which has become the main Balkan country of transit for migrants, Prime Minister Zoran Milanovic reminded that “closing (borders) and barbed wire does not prevent these kind of tragedies.”