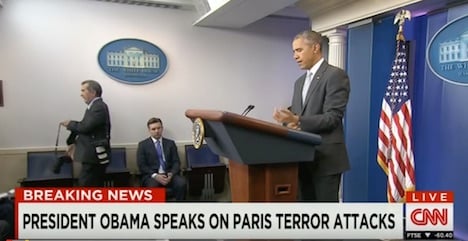 The president spoke to French President Francois Hollande earlier today to discuss the Paris Climate Change summit, but said he had not yet spoken to him after the reports of the attacks.  He refused to speculate on who might be responsible.

But he said the United States stands ready to provide whatever assistance may be necessary and vowed to work with the French and nations around the world “to bring these terrorists to justice, and to go after any terrorist networks that go after our people.”

“The French people have stood shoulder to shoulder with the United States time and again,” he said. “And we want to be very clear that we stand together with them in the fight against terrorism and extremism.”

He noted that France is the United States' oldest ally and recounted the French values of liberty, fraternity and equality.

“Those are values that we share,” Obama said. “And those values are going to endure far beyond any act of terrorism or the hateful vision of those who perpetrated the crimes this evening.

In a phone call on Saturday, Chinese president Xi Jinping told Hollande that China is ready to join France and the international community in stepping up security cooperation and combating terrorism.  He also condemned Friday's attacks, and offered condolences to the victims and their families.

A spokesperson for German president Angela Merkel said that she was 'deeply shocked' by the events of the evening, and offered her “sympathy and solidarity.”

Austria's Foreign Minister, Sebastian Kurz, was one of the fastest to tweet his support, saying “We stand with #France.”

Deeply shocked by horrible events in #Paris tonight. My condolences for the families of the victims – we stand with #France.

British Prime Minister David Cameron tweeted: “I am shocked by events in Paris tonight. Our thoughts and prayers are with the French people. We will do whatever we can to help.”

Russian Foreign Minister Sergei Lavrov said Saturday that a string of bloody attacks in Paris justified an even stronger fight against radical jihadists such as the Islamic State group.

Austria's president Heinz Fischer also expressed his deep concerns over the attack, saying “I am deeply shocked and appalled by the series of attacks in Paris. I express my deepest sympathy to the French people and especially the families of the victims. These are moments when we stick together firmly and our unity must demonstrate against inhumanity.”

The Swedish Foreign Minister, Margot Wallström, tweeted: “Horrible news from Paris tonight. Our thoughts and support goes to France and all those affected by the deadly attacks.”

Donald Tusk,  President of the European Council, also expressed his shock and sympathy.

I follow with shock the attacks in Paris. My full solidarity & sympathy with the French people and authorities

'Violation of all religions'
Jean-Claude Juncker, the President of EU Commission, expressed his solidarity with the people of France.

I am deeply shocked by the events in Paris. We stand in full solidarity with the people of France.

The “heinous” Paris attacks are a violation of all religions and underline the need to intensify efforts against “terrorism”, Saudi Arabia's foreign minister said Saturday as he arrived in Vienna for talks on ending Syria's civil war.

“I wanted to express our condolences to the government and people of France for the heinous terrorist attacks that took place yesterday which are in violation and contravention of all ethics, morals and religions,” Adel al-Jubeir told reporters in Vienna.

“The kingdom of Saudi Arabia has long called for more intensified international efforts to combat the scourge of terrorism in all its forms and shapes,” he said.

The President of Iran, Hassan Rouhani postponed a planned trip to Rome to meet the Pope and the Italian prime minister after hearing of the attacks in Paris.

“In the name of the Iranian people, who have themselves been victims of terrorism, I strongly condemn these crimes against humanity and offer my condolences to the grieving French people and government,” Rouhani said.

The regional government of Catalonia said it is “By the side of the French people in the face of this terrorist barbarity and fanaticism.”

Spain's government released a statement: “Today more than ever, we reiterate our categoric repulsion before this type of terrorist act and share with the government of France and the French people our closeness and solidarity. We are all united against terror. Today we are all with Paris.”

The Spanish Prime Minister Mariano Rajoy tweeted: “Shocked at the news coming in from Paris. France has by its side the Spanish people in these very difficult times. MR”