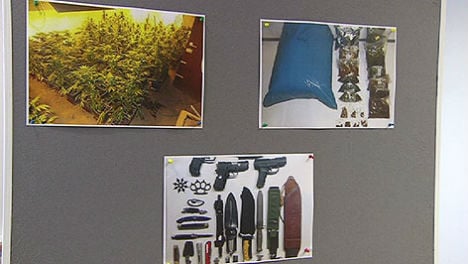 Police photos of the seized drugs and weapons. Photo: ORF

The gang were also growing around 3,300 cannabis plants at an indoor location. Many of their customers were teenagers and young adults from Burgenland who were active in the techno scene.

Police began investigating the gang earlier this year after being tipped off by worried parents who feared their children were regularly being sold drugs by local dealers.

21 suspects are under investigation and 11 have been arrested. Police carried out 14 house searches and seized drugs worth around €120,000 as well as several illegal weapons such as brass knuckledusters and knives.

The alleged ringleader is 35 years old and comes from Neunkirchen.

The suspects include 13 men and four women from Austria, a German man, a Czech woman, and two men from Afghanistan and Brazil, all aged between 16 and 35 years old. Police said only one of the gang is employed, with 13 members claiming unemployment benefits, four are students and one is an asylum seeker.

Burgenland police chief Hans Peter Doskozil said drugs are a major problem in Burgenland, especially among young people. Driving under the influence of drugs was particularly prevalent in young people between the age of 17 and 25 he added, with drugs a bigger issue than alcohol.

This year 50 people have been caught driving under the influence of drugs in Burgenland, almost all of them under the age of 25.