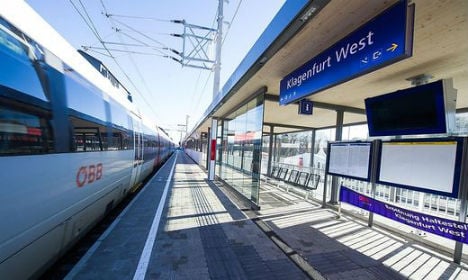 “It was extremely humiliating and more than embarrassing,” Jennifer H. from Villach told the Kleine Zeitung newspaper. She has a monthly travel ticket and takes the regional Krumpendorf train to Klagenfurt every day, where she is a student at the university.

“You shouldn’t be able to do something like that without first warning the passenger – it’s such a degrading thing to just expose them,” she added.

ÖBB spokesman Christoph Posch confirmed that the incident had taken place. “The ticket inspector saw a group of beggars boarding the train and shortly afterwards the toilet door was locked. He suspected they were hiding in the toilet – which has been the case before.”

“We want to emphasize that they were not migrants, but a well-known group of fare dodgers,” Posch added. He said that the ÖBB had apologized to Jennifer H. and had spoken to the ticket inspector.

However, Jennifer H. remains unimpressed and said that no matter who is using the toilet, she believes they have the right to some privacy.