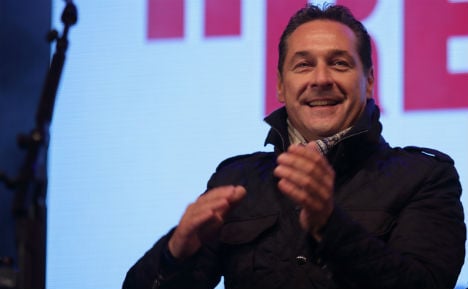 He told the ORF state broadcaster that he believes the government has mismanaged the refugee crisis and that if possible a fence should be built along Austria’s borders where refugees and migrants are trying to cross.

He added that if the government could not agree on building a fence, they should at least reinforce border patrols. He described a border fence as “a small technical detail of a necessary political approach”.

He quashed objections by the Social Democrats (SPÖ) that a border fence would cost too much as ridiculous, saying that the Hungarian fence “only costs €170,000 per kilometre”. He said that Hungarian prime minister Viktor Orban’s approach had been “successful” and that it was about “protecting the population” during a time which called for “extraordinary measures”.

Strache said his lawsuit would be targeted at Chancellor Werner Faymann, Interior Minister Johanna Mikl-Leitner, Defence Secretary Gerald Klug and managers at Austrian Railways (ÖBB). He accused the government of having no idea how many refugees and migrants had entered Austria.

On Monday the governing ÖVP and SPÖ parties are meeting to discuss whether a border fence should be erected.

The government has said it expects some 85,000 asylum claims this year, making Austria one of the highest recipients in Europe on a per-capita basis.

This has boosted support for Strache’s FPÖ party, which is leading in opinion polls with over 30 percent of voter intentions.