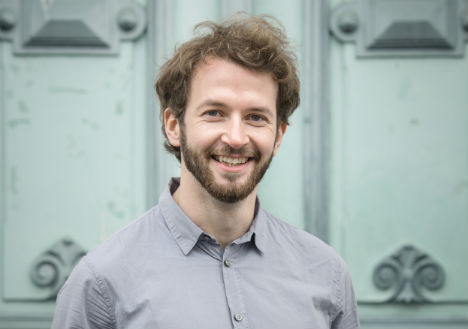 The site is all about establishing local contacts and tapping into the sharing economy. Locals of all ages were quick to sign up when it launched in May 2014, and it now has around 17,500 members.

Having recently won a grant from a group of business investors, the four founders can now afford to pay themselves a modest salary and have taken on their first employee. “We’re really lucky that we found investors who want to make a profit from the business but can also see the social benefit it has – and are keen that that should increase,” Theissbacher told The Local.

In terms of generating revenue the idea is that local businesses and councils can create an online profile on the site and will pay to talk to people via message boards, promote their goods and services and offer discounts to locals.

Their first customer is Lokale Agenda 21, an organisation supported by the City of Vienna which works on building community and is a perfect fit. “We support and publicise their local events which are aimed at creating more life in Vienna neighbourhoods,” Theissbacher said.

Frag Nebenan is organising a series of neighbourhood social events for November 12th – all part of developing its 'real life' presence.

Theissbacher is adamant that Frag Nebenan will never have classic banner ads and won’t be involved with any political groups. It also discourages any unfriendly communication on its message boards and removes users who break its house rules.

“We’ll never be a classified ads site – it’s all about keeping it local and making connections with people who live a few streets away – who are within ten or 15 minutes away, by foot. It’s about finding someone who can walk your dog when you’re sick, or pick up medication for you from the pharmacy. Or maybe you need to borrow a household item or want some gardening advice.” Before starting Frag Nebenan Theissbacher studied international management and communications and worked for Datum magazine and then as assistant to the CEO of Austrian listings site Bazar.at.

He loved his job but says he was searching for something that would give him a “greater sense of purpose”. What he came up with was a project that aims to transform neighbourhoods into communities and combat the problems of urban isolation and segregation.

He grew up in a small village in Carinthia, and although he has a wide friendship circle in Vienna, he realised he hardly knew any of the people who lived in his apartment block – let alone his street.

For him it was the ideal time to develop a startup as “at the moment I don’t have a family, or any financial obligations, and I’m still young enough to be happy living a student lifestyle with few outgoings.” He started out working on the project in his kitchen but soon moved to Impact Hub – a co-working space and events centre in Vienna’s 7th district – where he met two of his team members.

“Impact Hub opened a lot of doors for us. We made really useful contacts, who helped us set up meetings with potential investors, and we won a stipend which gave us free office space, among other things. We also got support from the Wirtschaftsagentur which gave us free coaching on how to apply for grants.”

Frag Nebenan's website is constantly being updated, with new functions added every week, but at present it only offers about 50 percent of the functionality Theissbacher would like it to have.

An English version isn’t available – yet – but some members do post questions in English and expats in Vienna have also told Theissbacher they find the site helpful for improving and practising their German.

Long-term, his plan is to establish Frag Nebenan in every major city in Austria, Germany, and Switzerland.