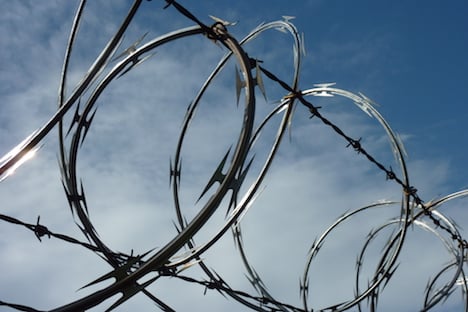 In a major policy reversal for the Austrian government, the Interior Ministry and police have begun to put in place temporary measures consisting of rolls of razor wire at major refugee border crossings, according to a report in the Kleine Zeitung newspaper.

As police try to control the massive influx of people seeking to cross into Austria, they were overwhelmed with the numbers. A police spokesman said that “the embankment was secured with help from rolls of barbed wire.”

“This is not about a border barrier of several kilometres,” he said last month. “We are not fencing Austria in.”

Garden fence – with a gate

Interior minister Johanna Mikl-Leitner defended the measures, saying in an interview on Germany's ARD TV that “a fence is not a bad thing.  Anyone who has a house, has a garden and a fence.”

She explained that a “garden fence” was necessary to decide who was allowed to come in, and who would be kept out.

German politician Hans-Peter Friedrich supported Mikl-Leitner's analogy, saying “I don't know why there is this demonization of fences.  Many people have fences around their gardens.”

“The crucial thing is that there is also a garden gate, where you can allow people to come in.”

Austria's policies came in for criticism from Germany's SPD parliamentary leader Thomas Oppermann, who said: “At the moment there is lawlessness because Austria does not adhere to the Dublin procedure.  Austria is refusing to send refugees back to Slovenia, and instead is passing them on to Germany.”

Meanwhile, on Monday afternoon a soldier from the Austrian 23rd Battalion of Vorarlberg was attacked with a fence post by a refugee while patrolling the border with Slovenia.  He suffered cuts to his face and hand, and was treated at a nearby hospital, according to a report in the Kronen Zeitung newspaper.

The mayor of Graz, Siegfried Nagl of the centre-right People's Party, suggested that refugees should be welcome, but only if they are with women or children.

“For [families of women and children] we have a place, but the [single] men who want to come for help, we must make it clear to them that here, there is no capacity.”

When asked if this policy might be illegal under international law, he went on to tell a press conference “on a ship that is in distress, it’s women and children first to be saved, not the men”.