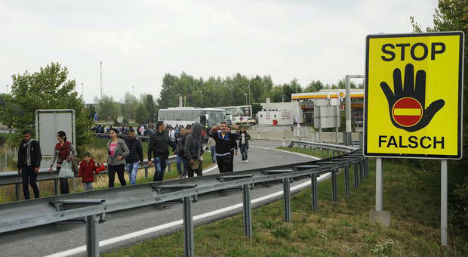 Volunteers drove to collect refugees who were stuck in Hungary. Photo: APA

Der Standard reports that at least three people who took part in the convoy on September 6th are the subject of an investigation by the Vienna public prosecutor’s office. Around 150 cars were driven to Budapest and Györ in Hungary, where they picked up refugees and drove them back to Austria for no charge.

The Linz public prosecutor is investigating another citizen initiative to help refugees – an online platform called ‘fluchthelfer.in’ which was launched in Germany and gives people tips on how to help refugees without facing prosecution. The site’s owners could face charges of encouraging people to commit crimes and disobey the law, and if convicted they would face a maximum of two years in prison. Authorities in Germany are also looking into the case.

Michael Platzer, an envoy of the Academic Council on the United Nations System (ACUNS), said at a meeting at the Institute of Criminology in Vienna that the state is forcing people to break the law as it has made legal passage for refugees impossible.

He argued that the law regarding people smuggling should be abolished, as it only serves “to drive smugglers’ prices up”. Recent proposals to tighten asylum laws in Austria – which would make it harder for family members to join recognised refugees – will drive more people into the arms of people smugglers, he added.

Vienna defence lawyer Joseph Phillip Bischof believes that the law is often used to disproportionately punish people. It states that someone is guilty of people smuggling if they have benefited from transporting someone, “but this could be something as small as an invitation to lunch” Bischof said.

However, Gerald Tatzgern, head of the government’s Anti-Smuggling Unit said that his department is only “concerned with the serious cases” and that the priority is to protect refugees.

Criminal law expert Andreas Schloenhardt told Der Standard that many people smugglers are in fact just doing what the government should be doing – giving refugees safe passage. He is in favour of targeted resettlement and the establishment of UN-supervised transit camps.