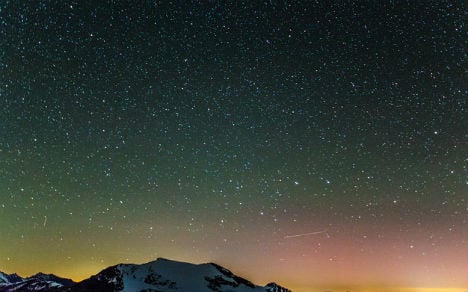 An image taken by Hermann Scheer from the Sonnblick Observatory. (Flickr)

Atmospheric physicists from Collm in Saxony and from the Sonnblick Observatory in the state of Salzburg both confirmed the news, the Frankfurter Rundschau reported.

The US National Oceanic and Atmospheric Administration (NOAA) had given advance warning of the “coronal hole high speed stream” on Monday.

A coronal hole appears as a dark region in the Sun's corona (outer layer) when viewed in ultraviolet or X-Ray wavelengths.

They have less material than surrounding areas of the sun's outer layer and allow solar winds to escape at higher speed.

Those faster streams of particles rushing out of the sun can cause geomagnetic storms on Earth as well as the extension of the Aurora Borealis effect to lower latitudes.

The Aurora Borealis can best be viewed in a place with little light on the ground with a good view to the north.

Check the NOAA's Space Weather Prediction Centre website or polarlicht-vorhersage.de for more information about the most likely times to see the Northern Lights.