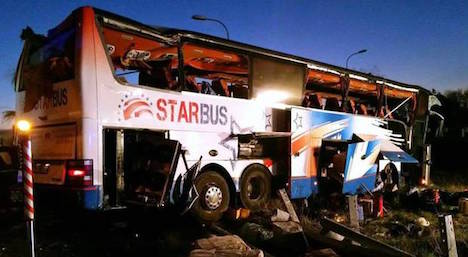 Photo: Lower Austria Police
The accident occurred on Vienna's outer ring motorway S1, near the Schwechat junction.  Several people have been injured, some seriously.
According to fire department spokesman Franz Resperger, there were 14 passengers on board, all from Ukraine.  There were no children on board.
When emergency services first arrived at the scene, they could only find 11 of the passengers, as three had wandered away, some in a state of confusion.
The bus had broken through a guard rail, and was seriously damaged.
Fire, police and rescue services mounted a full-scale operation with up to 70 personnel involved.  The S1 was closed, and major traffic delays were reported on the A4 as a direct result.