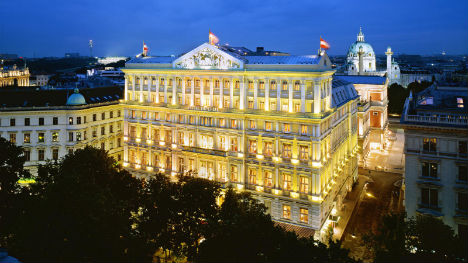 Although expectations on finding a workable political solution are low, the meeting is a significant step forward as it brings together the main supporters and opponents of the Syrian regime headed by Bashar al-Assad.

A dozen countries are expected to take part in the summit, including Turkey, Egypt, Iraq, Qatar, Lebanon, the European Union and France, following smaller negotiation talks earlier this week between the United States, Russia, Saudi Arabia and Turkey.

The meeting today at the Hotel Imperial in Vienna will be the first between Saudi Arabia and their rivals Iran about the conflict in Syria.

The negotiations are intended to bring an end to the conflict and take steps towards creating political stability in the war-torn country.

Speaking in Vienna on Thursday evening, the High Representative of the European Union for Foreign Affairs Federica Mogherini said: “I believe it is very important that tomorrow here in Vienna we will have all the relevant actors, regionally and internationally, relevant actors playing around the same table trying to define a common space for the beginning of the political process to find a solution to the crisis in Syria.”

“Let’s see if the work we have done in coordination with the US, with Russia, these days, these weeks, allows us to open this political space, and create the possibility for a follow up, for the beginning of a process that can lead us to a political transition in Syria.”

The meeting comes after a month of air strikes from Russia, who are backers of the al-Assad regime in Syria, on areas in the country held by both ISIS and anti-Assad groups.

According to the Syrian Observatory for Human Rights, an organisation based in the UK, the Russian air strikes have killed 595 people, two-thirds of whom are believed to be fighters.

Meanwhile the US, who along with countries such as Turkey, Saudi Arabia and other Gulf Arab nations want to see al-Assad removed from power, this week announced they would be looking to expand their role in the conflict by potentially placing advisers with Syrian forces fighting ISIS.

Speaking before he boarded a plane to Vienna, the US Secretary of State John Kerry said: “The challenge that we face in Syria today is nothing less than to chart a course out of hell.”

“While finding a way forward on Syria will not be easy… [the summit] is the most promising opportunity for a political opening we have seen.”

The crisis in Syria has led to millions of refugees fleeing to neighbouring countries, including two million alone in Turkey, with hundreds of thousands making dangerous journeys to Europe to seek asylum.

It is thought that more than half a million asylum applications made in European countries since 2011 are from Syrians.