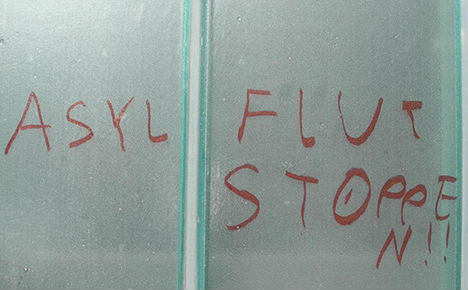 'Stop the asylum flood' was daubed on a refugee centre. Photo: Polizei

Police tracked him down after he posted pro-Nazi statements on social media. When officers arrived with a search warrant for his home he tried to attack a police woman with an iron bar. He was restrained by her colleagues and she was unharmed.

A search of his home on October 28th revealed a stash of banned Nazi materials and stickers with right-wing and anti-immigrant slogans on them.

After being questioned by police the teenager, from Hohenems, confessed to having daubed anti-Semitic and right-wing extremist symbols and slogans on buildings – including a refugee centre, a Jewish Museum, a chapel, an underpass, Jewish memorials and buildings and Jewish and Muslim graves. He also admitted to having distributed flyers containing banned content.

He has been charged with 15 criminal offences including violating the prohibition law, serious damage to property, resisting arrest and attempted grievous bodily harm to a police officer.

Police spokeswoman Susanne Dilp said the youth was not affiliated with any right-wing group and that officers believe he was acting alone. He had been in contact with other right-wingers, but only online, and not in person.

He is being held in custody in Feldkirch. Detectives are still examining his computer for more evidence.