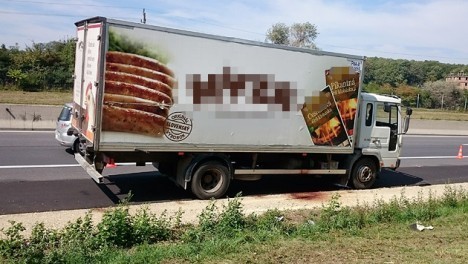 The abandoned truck in which the bodies were found. Photo: Screen shot from video by Andi Schiel

One Syrian man had to pay €6,000 to have the bodies of his two sons returned, according to a report in the Kurier newspaper. The coffins of 34-year-old Hussein and 21-year-old Raman were flown from Austria to Syria via Iraq.

Their father, Mustafa Khalil, was quoted by the Syrian Observer paper as saying that he believes Serbia, Hungary and Austria hold some responsibility for his sons’ deaths.

They left their hometown of Qamishli in 2013, fleeing Islamic State jihadists, and made their way to Serbia. Their father said he last spoke to them on the telephone on August 25th, 2015. They told him that they had each paid an Iraqi people smuggler €1,600 to take them to Austria via Hungary.

The badly decomposing bodies of 59 men, eight women and four children were found on August 27th inside an abandoned refrigerator truck on Austria's A4 motorway, close to the Hungarian border.

When Mustafa Khalil heard the news he sent pictures of his sons to the Austrian authorities, and gave details of the clothing that they had last been wearing. He waited for ten days before the authorities could confirm that his sons were among the dead. He then paid to have their bodies flown back to Syria, where he buried them in Qamishli.

Burgenland police spokesman Gerald Pangl told the Kurier that the family of one Iraqi victim paid €5,000 to have their relative's body flown home.

So far, 54 bodies have been identified and the majority have been flown back to their homes for burial. Their death certificates were issued by the town of Nickelsdorf in Burgenland. Nickelsdorf mayor Gerhard Zapfl told the Kurier that the costs of sending a body back to Syria, Iraq or Afghanistan is between €3,000 and €4,000.

Family members who feared their relatives were among the dead sent samples of their blood to Austrian authorities to enable DNA identification of the corpses. 17 identified bodies are expected to be buried in Parndorf, where the truck was found.

So far, six suspects have been detained in connection with the case, which sparked international revulsion and highlighted the plight of migrants and refugees putting their lives in the hands of people smugglers to reach Europe.