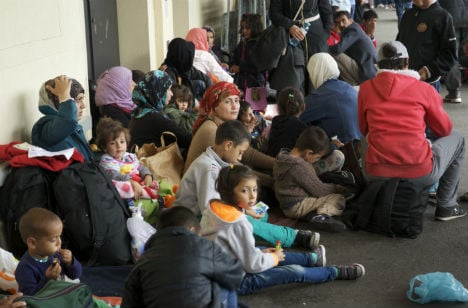 Austria's failure to tell Bavaria when thousands of refugees are arriving or being brought to the border is causing problems, Horst Seehofer said.

“This behaviour by Austria burdens our neighbourly relationship. You can't and mustn't treat one another like this,” he added.

Seehofer said that Merkel's top priority ought to be limiting what he said were uncontrolled flows of people from Austria into Germany across the Bavarian border.

“It's the Chancellor's job to speak with Austria,” he said, adding that the two national governments had decided to introduce the much criticized 'open-borders' policy together.

“If I'm not successful [in getting an answer from Berlin] then we will have to consider what options for action we have,” Seehofer told the Passauer Neue Presse – implicitly reiterating his threat to bring in undefined “emergency defence” measures if the federal government doesn't help.

Bavarian authorities complain that the lack of coordination is leaving them scrambling at the last minute to find resources to welcome the new arrivals.

Police spokesman Frank Koller said Austria had informed them that nine buses carrying asylum seekers were on their way to Bavaria on Tuesday, but from “unofficial sources, we learnt that there are in actual fact 22 buses on the way”.

Austrian authorities rejected the claims as “a joke”, saying both sides are in constant contact over coordination on the asylum seeker influx. They also criticised Germany’s introduction of a border crossing limit of 50 people per hour.

“Usually we don't comment on political statements but the fact is that if Austria receives 11,000 people in Spielfeld on a daily basis, Bavaria cannot say that it will just process up to 50 people an hour at its border. That's a joke,” said police spokesman David Furtner.

“Plus this doesn't meet German standards: the government said that all refugees would be welcome. There seems to be a problem of interpretation by German national police who counteract the directive with restrictions (in migrant numbers),” he added.

Hundreds of refugees have been forced to wait for hours outside in the cold without knowing when they will be able to continue onto Germany.

The Austrian Red Cross said it treated 6,500 refugees on Monday night and was able to house 3,000 in emergency shelters. “The others continued onto Germany, and crossed the border,” Red Cross spokesman Christoph Patzalt said.

A report in the German newspaper Sueddeutsche Zeitung described the situation at the Achleiten border crossing in Austria as chaotic and said that whilst police are happy to escort refugees to the German border they are not providing them with “tents, blankets, or tea”.

Austrian authorities have said they expect around 7,000 refugees to cross the border into Austria from Slovenia on Tuesday.

Aid agencies have said they are extremely concerned about the welfare of refugees arriving in Slovenia from Croatia, who are ill-equipped to deal with the increasingly cold weather.