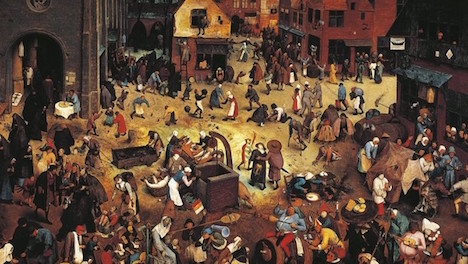 Pieter Bruegel the Elder, The Fight Between Carnival and Lent (1559). Photo: Wikipedia

Krakow's National Museum has unearthed documents which claim that the painting, worth an estimated €70 million ($77 million), was seized by Charlotte von Wächter, the Austrian wife of Krakow's then Nazi governor Otto von Wächter.

The painting, which is currently displayed in Vienna's Kunsthistorisches Museum, is now subject to a row over its ownership and provenance.

“It is impossible to overstate the importance of this painting,” Meredith Hale, a fellow in Netherlandish art at Cambridge University, told the press. “If it was taken unlawfully from Krakow to Vienna, it would be a huge story for the art world, as big as it gets.” Otto von Wächter (right) with other members of the Nazi command in occupied Poland. Photo: via Opera Mundi

Diana Blonska, director of the National Museum in Krakow, has presented a research paper in which she claims that documents in the museum's archive state that Charlotte von Wächter visited the museum in 1939 and took the painting alongside others, some of which “ended up in the antique markets of Vienna.”

Blonska even cites a letter written by Feliks Kopera, then-director of the museum, in March 1946 and sent to Krakow's authorities:

“The Museum suffered major, irretrievable losses at the hands of the wife of the governor of the Kraków Distrikt, Frau Wächter, a Viennese woman aged about 35. […] Items that went missing included paintings such as: Breughel's The Fight Between Lent and Carnival.”

The Kunsthistorisches Museum in Vienna, meanwhile, claims that it has owned the painting since the 17th century, and that the artwork seized by von Wächter in 1939 was a different painting.

The Times reports that there is a campaign by Polish authorities to recover art lost to the Nazis during World War II.  The government is likely to formally request Austrian authorities to undertake an investigation into the painting's provenance.

“There is evidence to suggest wrongdoing on a serious scale, and a pressing need to fully investigate the provenance of the Bruegel painting […] including whether it was taken from the National Museum in Krakow,” Philippe Sands, a law professor at University College London, told the FT.

Sands has written at length about the Wächter family and wrote the script of My Nazi Legacy (2015), a recently launched film about Wächter's son Horst, which in turn inspired Polish journalists to investigate the provenance of the Bruegel painting.