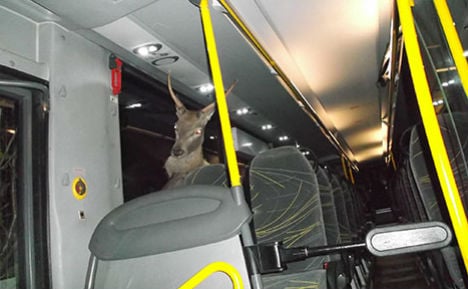 The stag was surprised to find itself in a bus. Photo: Police

The local bus was travelling between Kremsbrücke and Rennweg with just one passenger when the accident happened at around 7.30pm. A young red stag crossed the road and the driver was unable to stop in time and avoid hitting it.

It smashed through the windscreen and started to beat its antlers in panic. The 53-year-old driver and his shocked passenger moved out of its way so that it could run to the back of the bus.

However, the driver forgot to put on the handbrake and the bus started rolling backwards and down an embankment, before crashing into a tree – which prevented it from landing in the river.

The driver and passenger were able to open the bus’s rear door and let the stag out, which immediately ran off – apparently unharmed.

The driver had some minor injuries and had to be treated in hospital for shock.

It’s estimated that the damage to the bus will amount to €15,000. The Katschberg B99 road was closed for three hours whilst police recovered and towed away the bus.

Every year an estimated 2,500 deer and 130 stags die on Carinthia’s roads. The windscreen came off worse than the stag. Photo: Police