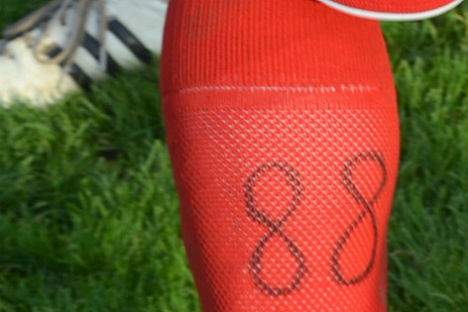 The player had written 88 on his socks - a far-right code for Heil Hitler. Photo: Peter Rustia

The incident happened during a match on Saturday between ASKÖ Wölfnitz and Zell/Sele – which is a bilingual team of Carinthian Slovenian players.

The player from ASKÖ Wölfnitz wore socks with the symbol 88 drawn on them – which in far-right circles is code for HH – or Heil Hitler. His coach said that 88 is the player’s ‘lucky number’ and has nothing to do with Nazism. The footballer has not commented, and has now been suspended pending the results of an investigation by the office for the protection of the constitution.

One of the Zell/Sele players said that after a foul in the second half of the match the ASKÖ Wölfnitz player told him that all people from the Balkans “should be gassed and shot” and that there is “only one leader” – and then made a Hitler salute. The Zell/Sele player reported the incident to the referee, who said that he hadn’t seen the incident and therefore could not take any action against it.

Werner Lippitz, from the Carinthian Football Association, said that any form of racism, discrimination or intolerance is inexcusable and must have consequences.

He called for a full investigation into the incident, and said that all those involved should be given a chance to speak.

Carinthian governor Peter Kaiser has demanded an apology from ASKÖ Wölfnitz and said “such vile outbursts must not be allowed to happen in Carinthia”.