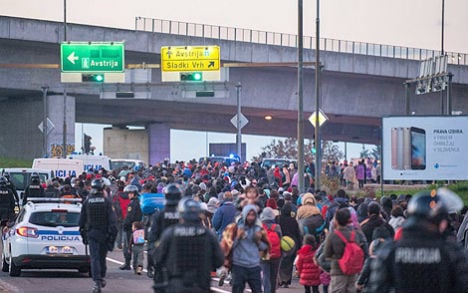 Police opened up barricades at a refugee camp on the southern Styrian border crossing at Spielfeld on Thursday morning to let hundreds of people through and to prevent injuries, after the situation became chaotic.

2,200 refugees spent the night in Spielfeld but many were impatient to continue their journey onto Vienna or Germany.

Hundreds of people spent the night outside exposed to the elements, and the Red Cross has said it is putting up heated tents during the day which will be able to accommodate 1,000 refugees.

“Police task forces have been continuously deployed since the beginning of the refugee crisis – our police officers are at breaking point and the situation is unlikely to become more relaxed this year,” Mikl-Leitner told the Kronen Zeitung.

“Austria immediately needs between 1,500 and 2,000 more police,” she said, adding that she is confident that European asylum and integration measures “will take hold in the medium term”, but that the police will “even in this context, face new challenges”.

Currently 28,000 police officers are on duty throughout Austria. In September officers logged 420,000 working hours (including 190,000 hours overtime) working to help cope with the refugee crisis.

Aid workers say they fear for the health of refugees who have been forced to sleep out in the open in worsening conditions, after Hungary, Croatia, and Slovenia closed all or parts of their borders, leaving many people stranded and short of vital supplies.